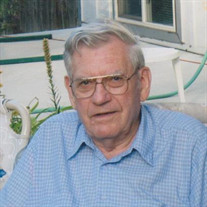 Raymond Hacker, age 98, of Carroll, formerly of Halbur, died Sunday, February 6, 2022 at Regency Park Nursing Home in Carroll. Mass of the Christian Burial will be celebrated at 10 a.m. Saturday, February 12, 2022 at St. Augustine Catholic Church in Halbur. The Celebrant will be Fr. Lynn Bruch. Music will be by Jane Heithoff. Lectors will be Patrick Rodenborn and Jessie Crowley. Gift Bearers will be Tyson Rodenborn, Alex Crowley, Oliver Tigges, Olivia Noring Frias, and Andie Tigges. Eucharistic Minister will be Julie Eischeid. Casket Bearers will be Patrick Rodenborn, Mark Rodenborn, Corey Leiting, Lisa Tigges, Jessica Crowley, Kelly Noring, Kim Lawson, and Megan Bomar. Burial will be the parish cemetery with military honors conducted by the Arcadia American Legion. Visitation will be held from 5 to 7 p.m. Friday evening at the Sharp Funeral Home in Carroll. The casket will be moved to St. Augustine Church on Saturday morning where visitation will continue from 9 to 9:45 a.m. Following the committal service at the cemetery the family invites you to join them for a reception and luncheon celebrating the life of Ray and his wife Margie who passed away during the COVID Lockdown. Funeral arrangements are under the guidance of the Sharp Funeral Home in Carroll, and online condolences may be left for Ray’s family at www.sharpfuneral.com. Raymond Joseph Hacker was born on December 20, 1923, in Morgan, Minnesota to Frank and Helen (Frank) Hacker. He attended school in Willey until the 8th grade. He enlisted in the United States Marine Corps as a young man and was scheduled to report for duty to fight in WWII when the war ended. Returning to Halbur he married Marjorie Hinners on September 22, 1948. Together they raised 5 children and had 72 wonderful years of marriage. Raymond drove truck for many years. He and Margie also owned Ray’s Chicken Inn in Halbur. He was a member of the St. Augustine Parish, Holy Name Society, the Arcadia American Legion Post #694, and R.S.V.P. Ray was a volunteer fireman and served as the Halbur Fire Chief. He was a member of the Halbur City Council and served as Mayor. Halbur was very important to Ray and he volunteered with many other community projects over the years. One of his very special memories was participating in the Honor Flight to Washington D.C. In his later years he enjoyed building doll houses and working on jigsaw puzzles. Ray is survived by his sons: P.J. Hacker of Norfolk, VA, Ronald Hacker of Ankeny; daughters: Donna Noring (Larry Duarte) of Aurora, CO, Sheri Leiting of Carroll, and Peggy Rodenborn (Butch) of Twin Lakes, IA; 10 grandchildren, 16 great-grandchildren; his brothers-in-law and sisters-in-law: Larry (Della) Hinners, Jack (Lois) Hinners, Margaret Hinners, Lois Hinners, Judy Hinners, and Helen Hinners, as well as many nieces, nephews, and other extended relatives. Ray was preceded in death by his wife Marjorie, April 30, 2020; his parents: Frank and Helen Hacker; his brothers: Frank and George Hacker; and sisters: Helen Zitzlesperger and Ann Heiers.

The family of Raymond Hacker created this Life Tributes page to make it easy to share your memories.

Send flowers to the Hacker family.