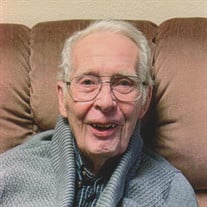 Raymond Beckman, age 93, of Carroll, died peacefully on Sunday, March 8, 2020 at Regency Park Nursing Home in Carroll. Mass of the Christian Burial will be celebrated at 10 a.m. Friday, March 13, 2020 at St. John Paul II Parish- St. Lawrence Church in Carroll. The Celebrant will be Fr. Timothy Schott. Music will be by Jane Heithoff and the St. Lawrence Choir with Sherry Loughran as cantor. Lectors for the mass will be Evan Beckman and Megan Downey. Gift Bearers will be Verna and Mike Tunning, Ruth and Alan Kokenge, and Louis Starman. Eucharistic Ministers will be Joleen Mooney, Peg Scheidt, and Teresa Beckman. Casket Bearers will be Raymond’s grandchildren, Evan Beckman, Lauren Harding, Megan Downey, Ashley Quinn, Kara Barton, Ray Beckman, Lexi Beckman, and Jack Beckman. Burial will be at Mt. Olivet Cemetery in Carroll with Military Honors conducted by the Carroll American Legion. Friends may call at the Sharp Funeral Home in Carroll after 4 p.m. on Thursday where there will be a Carroll Knights of Columbus Rosary prayed at 5 p.m., and a Christian Wake Service will be held at 6:30 p.m. The casket will be moved to St. Lawrence Church on Friday morning where visitation will resume from 9-9:45a.m. Funeral arrangements are under the direction of the Sharp Funeral Home in Carroll, and online condolences may be left for Raymond’s family at www.sharpfuneral.com. Raymond, the son of Henry and Anna (Schwabe) Beckman was born on March 17, 1926 in Westside, Iowa. He graduated from Arcadia High School in 1944. On October 21, 1944, Raymond was inducted into the United States Army, proudly serving his country during World War II. He was honorably discharged on Christmas Day, 1946 and returned home to Arcadia. On June 28, 1954 Raymond was united in marriage to Irene Buelt at St. Augustine Catholic Church in Halbur. The couple made their home in Carroll where Raymond was employed as the Parts Manager for the Chevrolet Dealerships in Carroll. Over the years, Raymond enjoyed gardening, caring for his pristine yard, helping his neighbors with any household tasks, supporting the St. Louis Cardinals, playing cards, socializing at the morning coffee group, traveling across the United States, visiting his children and grandchildren, and caring for his wife, Irene, in their later years. He was a member of St. John Paul II Parish-St. Lawrence Church, Knights of Columbus, and the Carroll American Legion, where he served as the unit’s historian. Left to celebrate Raymond’s life is his wife of 66 years, Irene Beckman, of Carroll; his three children and their families: Mark Beckman and his wife, Gail, of Charlottesville, VA; their son, Evan (Shelly) Beckman, and their daughters , Morgan and Lydia, of Winston-Salem, NC, and their daughter, Lauren (Evan) Harding, and their son, Hayes, of Richmond, VA; Lori Elder and her husband, George, of Charlottesville, VA; their daughter, Megan (Chris) Downey, and their children, Aiden and Charlotte, of Ruckersville, VA; their daughter, Ashley (Dan) Quinn, and their daughter, Kinley, of Warrington, PA, and their daughter, Kara (Jeff) Barton, of Richmond, VA; Scott Beckman and his wife, Teresa, of Grayslake, IL; and their children, Ray Beckman of Chicago, IL, Lexi Beckman of Grayslake, IL, and Jack Beckman of Grayslake, IL. Also surviving are his siblings: Verna (Leonard “Mike”) Tunning of Dedham, Virginia Buelt of Waltham, MN, and Phyllis Wernimont of Virginia Beach, VA, and a brother-in-law, Louis Starman, of Carroll; as well as many nieces, nephews, and other extended relatives. Raymond was preceded in death by his parents; sisters: Lucille (Herb) Buelt, Eunice Starman; brothers-in-law: Leonard Buelt, and Donald Wernimont.

The family of Raymond Beckman created this Life Tributes page to make it easy to share your memories.

Send flowers to the Beckman family.