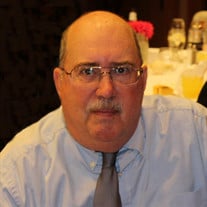 Randy J. Romey, age 68, of Templeton, died Thursday, February 2, 2017, at his residence in Templeton. Mass of the Christian Burial will be celebrated at 10 a.m. Saturday, February 11, 2017, at Sacred Heart Catholic Church in Templeton. The celebrant will be Fr. Steven Brodersen. Music will be by Hannah Warner and the Sacred Heart Men’s Choir. Lectors will be Ryan McNamara and Andy Romey. Gift Bearers will be Hannah, Grant, and Mariah Wiskus, and Brooklyn and Madyson Romey. Eucharistic Minister will be Terry Romey. Casket Bearers will be Nick Romey, Stan Romey, Russ Romey, Dave Schwaller, Dale Prebeck and Mike Romey. Burial will be in the parish cemetery with military honors conducted by the Dedham American Legion, and the Seabee Veterans of America. Friends may call at the Sharp Funeral Home in Carroll, after 5 p.m. on Friday, where there will be a Christian Wake Service held at 7 p.m. The casket will be moved to Sacred Heart Church on Saturday morning, where visitation will resume at 9 a.m., and continue until the time of the funeral mass. Funeral arrangements are under the direction of the Sharp Funeral Home in Carroll, and online condolences may be left at www.sharpfuneral.com. Born on October 29, 1948 at Carroll, Iowa, Randy was the son of Clifford and Beatrice (Schwaller) Romey. He grew up in Templeton, and attended school at Sacred Heart School in Templeton. Randy later graduated from Kuemper Catholic High School. Between 1980 and 1993 Randy served with the United States 15th Naval Mobile Construction Battalion, more commonly referred to as the Seabees. Randy served for many years as the Senior Military (combat) Instructor or the SMI with the Seabees. Randy took great pride following in his father’s footsteps, as Cliff served as a Seabee in World War II, and he also took pride in serving with his son Matt for 3 years. Matt served from 1989 to 1991 and he was also made the (SMI) a few years after Randy for the 15th Battalion which made Randy proud. Randy was an electrician who started his own business in 1978. Randy was very proud of Romey Electric and worked hard every day until he retired after his stroke in 2003. He also served the Templeton community in countless ways. He served as a first responder, and fireman, street commissioner, and as a city councilman for over 20 years. Randy was also very active in the Templeton 4th of July Celebration. He was a member of the Dedham American Legion. Randy took great pride in his family. He loved his children, grandchildren and nieces and nephews. He took great pride in their accomplishments and spending time with them brought him great joy. Randy was a great man, he lived a good life and set an example for all to follow. He will be sorely missed. Randy is survived by his children: Matt (Gretchen) Romey of Pecatonica, IL, and Mandy (Alan) Wiskus of Castle Rock, CO; his grandchildren: Brooklyn, Madyson, Georgia, Samuel, Jackson, Lucas, Hannah, Grant, and Mariah; his siblings: Alice Henderson of Ft. Wayne, IN, Nick (Terry) Romey, of Templeton, Russell (Tricia) Romey, of Granger, IN, Stan (Lorraine) Romey of Templeton, and Rose McNamara of Templeton, as well as many nieces, nephews, and other extended relatives. Randy was preceded in death by his parents: Cliff in 2012, and Bea in 1995.

The family of Randy Romey created this Life Tributes page to make it easy to share your memories.

Send flowers to the Romey family.