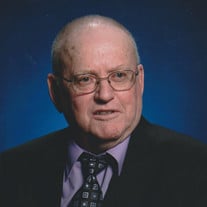 Ralph Niehaus, age 82, of Arcadia, died Wednesday, August 22, 2018, at Shady Oaks Nursing Home in Lake City. Mass of the Christian Burial will be celebrated at 10:30 a.m., Monday, August 27, 2018 at St. John’s Catholic Church in Arcadia. The Celebrant will be Fr. Lynn Bruch. Music for the funeral mass will be by Sharon Bierl and the St. John’s Choir. Lector for the funeral mass will be Amanda Outhouse. Gift Bearers will be Katie Vogel and Morgan Vogel. Eucharistic Ministers will be Doris Riesselman and Neil Sibenaller. Casket Bearers will be: Marcus Vogel, Kirby Vogel, Korey Vogel, Morgan Vogel, Katie Vogel, Amanda Outhouse, Abbi Outhouse, Alex Outhouse, Arynn Outhouse, Presley Herrig, Mike Vogel, and Les Outhouse. Burial will be in the Arcadia Cemetery. Friends may call at the Sharp Funeral Home in Carroll after 3 p.m. on Sunday where there will be a Christian Wake Service at 5 p.m. Additional visitation will be from 9-10 a.m. on Monday at the Sharp Funeral Home. Funeral arrangements are under the direction of the Sharp Funeral Home in Carroll and online condolences may be left for Ralph’s family at www.sharpfuneral.com. Born on May 6, 1936 in Carroll County, Ralph was the son of Henry and Elizabeth (Olberding) Niehaus. Ralph attended St. John’s School and later graduated from Arcadia High School. Following his schooling he began farming with his family’s farm operation. On August 17, 1964, Ralph was united in marriage to Caroline Grundmeier in Carroll, Iowa. Ralph and Caroline made their home on the farm east of Arcadia where they raised their family. Ralph was engaged in grain and livestock farming his entire life and in 2005 the couple moved into the Arcadia Community. Ralph enjoyed hunting, baseball and playing cards with his friends. His greatest joy was spending time with his family and attending his grandchildren’s activities. Ralph was a member of St. John’s Catholic Church in Arcadia. Ralph is survived by his wife Caroline Niehaus of Arcadia; his daughters: Kristy Vogel and her husband Mike of Lohrville, and Deb Outhouse and her husband Les of Defiance; 9 grandchildren; his siblings: Mary Ann (Lawrence) Sibenaller of Roselle and Roland (Joyce) Niehaus of Omaha; as well as many nieces, nephews, and other extended relatives. Ralph was preceded in death by his parents, Henry and Elizabeth Niehaus; and his siblings: Leroy Niehaus, Arlene Schroeder, Marvin Niehaus, Betty Jean Niehaus, and Josephine Niehaus.

The family of Ralph Niehaus created this Life Tributes page to make it easy to share your memories.

Send flowers to the Niehaus family.