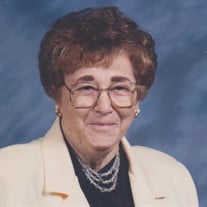 Phyllis Sibenaller, 93 of Carroll and formerly of Roselle, died Saturday, March 3, 2018 at Accura of Carroll. Mass of the Christian Burial will be celebrated at 10:30 a.m., Thursday, March 8, 2018 at Holy Angels Catholic Church in Roselle. The Celebrant will be Fr. Shinoj Jose. Con-Celebrant will be Fr. Steve Brodersen. Mass servers will be Vanessa and Brooklyn Foley. Music will be Sue Feilmeier and the Holy Angels Choir. Lector for the funeral mass will be Vern Behrens. Gift Bearers will be Dennis Sibenaller and Harold Sibenaller. Casket Bearers will be: Ashley Sibenaller, Austin Sibenaller, Grant Sibenaller, Logan Sibenaller, Mike Hoffman and Mitch Hoffman. Burial will be in Holy Angels Cemetery in Roselle. Friends may call at the Sharp Funeral Home in Carroll after 4 p.m. on Wednesday where there will be a rosary at 5 p.m. and a Christian Wake Service at 7 p.m. Additional visitation will be from 9-10 a.m. on Thursday at the funeral home. Funeral arrangements are under the direction of the Sharp Funeral Home in Carroll and online condolences may be left for Phyllis’ family at www.sharpfuneral.com. Born on July 21, 1924 at Carroll, Iowa, Phyllis was the daughter of John and Rose (Achatz) Hansman. She spent her younger years near Willey and attended St. Mary’s School. On January 23, 1945, Phyllis was united in marriage to Peter John “Jerry” Sibenaller. The couple farmed near Roselle where she was a devoted housewife and homemaker. Phyllis later moved to the Carroll community. She enjoyed playing cards, cooking and spending time with her family. Phyllis was a member of Holy Angels Church in Roselle. Phyllis is survived by her sons: Dennis (Rose) Sibenaller of Templeton and Harold (Ginny) Sibenaller of Austin, MN; her daughter-in-law, Wendy Sibenaller of Roselle; her grandchildren: Ashley, Austin, Grant, Logan, and Brian Sibenaller; 2 great-grandchildren; her sisters: Arlene (Don) Behrens of Carroll and Margaret Behrens of Carroll; her sister-in-law, Carolyn Sibenaller of Carroll; as well as many nieces, nephews and other extended relatives. Phyllis was preceded in death by her parents, John and Rose Hansman; her sons: LeRoy Sibenaller and Leo Sibenaller; her sister, Marcella Grossman; her brothers: Leroy, Lauris, Melvin and Robert Hansman. Phyllis was also preceded in death by Peter John “Jerry” Sibenaller.

Phyllis Sibenaller, 93 of Carroll and formerly of Roselle, died Saturday, March 3, 2018 at Accura of Carroll. Mass of the Christian Burial will be celebrated at 10:30 a.m., Thursday, March 8, 2018 at Holy Angels Catholic Church in Roselle.... View Obituary & Service Information

The family of Phyllis Sibenaller created this Life Tributes page to make it easy to share your memories.

Phyllis Sibenaller, 93 of Carroll and formerly of Roselle, died...

Send flowers to the Sibenaller family.