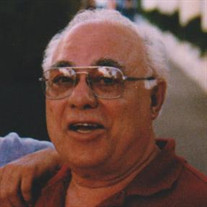 Philip Paul Alongi, age 90, of Carroll, Iowa, died Friday, June 1, 2018 at Wesley Acres Retirement Community in Des Moines, Iowa. Mass of the Christian Burial will be celebrated at 10:30 a.m. Thursday, June 7, 2018 at St. Lawrence Catholic Church in Carroll. The celebrant will be Fr. Kevin Richter. Con-Celebrant and Lector will be Fr. Richard Remmes. Music will be by Kate Cuddy, and the St. Lawrence Choir. Gift Bearers will be Collin Minear, Sofia Alongi, Lilliana Alongi, and Dominic Alongi. Casket Bearers will be Collin Minear, Mark Sexton, Tony Wagner, Paul McGowan, Matt Collison, Jeff Bruning, J.D. Feilmeier, Kent Middendorf, and Andy Massoth. Burial will be in the Carroll City Cemetery. Friends may call at the Sharp Funeral Home in Carroll after 4 p.m. on Wednesday, where there will be a Knights of Columbus Rosary prayed at 5 p.m., and a Christian Wake Service will be held at 6:30 p.m. Visitation will resume at St. Lawrence Church on Thursday morning from 9:30 a.m. to 10:15 a.m. In lieu of flowers memorials may be made in Philip’s name to the Alzheimer’s Association, P.O. Box 96011, Washington D.C., 20090-6011. Funeral arrangements are under the direction of the Sharp Funeral Home in Carroll, and online condolences may be left for Philip’s family at www.sharpfuneral.com. Philip was born on March 3, 1928, in Rockford, Illinois, the son of Nunzio and Fena (Cassioppi) Alongi. He grew up in Rockford, and in 1952 graduated from the University of Illinois, with a B.S. in Industrial Education. After graduation he joined Barber Colman Company in Rockford as an Engineering Trainee, and Tool Design Engineer. On October 10, 1953 Philip was united in marriage to Elinor Holm at Rockford, Illinois. The couple made their home in Rockford, while Philip was working for Barber Colman Company. In 1957 he joined Rockford Spring Company as a Spring Design Engineer. In 1959 he started with the Berley Company as a Product Engineer, and later was appointed Manager, Quality Control, and set up and established their new Quality Control program. In 1962 he joined General Electric Company – Appliance Control Department as Process Control Engineer. Philip had various product line Process Control Engineer assignments, as well as assignments as Process Control Engineer Purchase Material, and Fabrication Process Control Engineer in plastic molding area. This was followed by the position as Planner Fabrication Plastic Molding. In 1972 Phil accepted position as Unit Manager, Quality Control at General Electric in Carroll, and set up the quality control system used at the factory. Philip retired in 1988. Philip was an avid fisherman. He also enjoyed gardening, traveling, spending time with Elinor, and his family. Philip cherished watching any baseball, from professional to little league. He especially enjoyed watching his son play every game. Philip was a member of the Carroll Knights of Columbus, Moose Lodge, and St. Lawrence Parish, attending daily mass frequently. He volunteered his time with the constructing of St. Lawrence and Kuemper Catholic School, as well as Scott’s first restaurant, the Royal Mile in Des Moines. Philip is survived by his son: Scott Alongi his wife Melissa, and their children: Collin, Sofia, Lilliana, and Dominic of Des Moines; son: Allan Alongi and his wife Debbie, and daughter, Alexandra of Clarendon Hills, IL; his siblings: Margaret Lester of Scottsdale, AZ, Joseph Alongi of Rockford, IL, and Jack (Retha) Alongi of Rockford, IL; as well as nieces, nephews, and other extended relatives. He was preceded in death by his wife, Elinor on May 2, 2014, his parents, Nunzio and Fena Alongi, a brother-in-law: Charlie Lester, and his beloved canine companion, Bailey.

The family of Philip Alongi created this Life Tributes page to make it easy to share your memories.

Send flowers to the Alongi family.