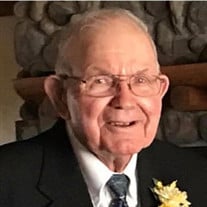 Peter George Danner Jr. (Bud), 89 of Carroll, died Saturday, February 12, 2022, at Regency Park Nursing Home in Carroll surrounded by his family. Mass of the Christian Burial will be celebrated at 10:30 a.m. Wednesday, February 16, 2022 at Holy Spirit Church – St. John Paul II Parish in Carroll. The Celebrant will be Fr. Kevin Richter. Music will be by Barb Danner and Alex Danner and Zach Shook. Lector will be Jeanne Kerkhoff. Gift Bearers will be Megan Scott and Allison Irlmeier. Eucharistic Minister will be Pat Oswald. Casket Bearers will be Heath Danner, Aaron Ewoldt, Ethan Scott, Tyler Danner, Evan Irlmeier, and Spencer McCarter. Burial will be at 1 p.m. Wednesday at St. Joseph’s Cemetery in Dedham. Visitation will be held at the Sharp Funeral Home in Carroll from 5-7 p.m. Tuesday. There will be a rosary prayed at 7 p.m. The casket will be moved to Holy Spirit Church on Wednesday morning where visitation will continue from 9:30 to 10:15 a.m. Funeral arrangements are under the guidance of the Sharp Funeral Home in Carroll and online condolences may be left for Pete’s family at www.sharpfuneral.com. Pete was born on February 17th, 1932 to Peter and Anna (Klocke) Danner of Dedham, Iowa. He was a member of St Joseph's Catholic Parish in Dedham, Iowa. He attended St Joseph's Grade School, completing the 8th grade. He worked on the family farm all of his life until retirement. On October 18th, 1958 he was united in marriage to Dorothy Vogl at Sacred Heart Church in Templeton. They made their family home on a farm at Dedham. They raised their 6 children on the farm. Pete raised grains, cattle, and hogs until retirement. In 2002, they moved to their home in Carroll and became members of St. John Paul II-Holy Spirit Church. He enjoyed his retirement by lending a helpful hand to all those in the neighborhood. He was a John Deere man and had great pride in his lawn as he loved to be on the mower, cutting grass or picking up leaves. Pete is survived by his wife Dorothy, children; Tom (Becky) Danner of Carroll, Kathy (Randy) Ewoldt of Urbandale, Susie (Curt) Scott of Carroll, Jeff (Joyce) Danner of Dedham, Janet (Allen) Irlmeier of Ankeny and Sarah (Kyle) McCarter of Melvin. 19 grandchildren, 17 great-grandchildren. Sisters-in-law and brothers-in-law: Lorraine Danner of Carroll, John (Adella) Vogl, Earl (Laurel) Vogl, Lorraine Vogl, Mary Ann (Norbert) Kasperbauer and Levan Eich and many nieces and nephews. He is preceded in death by his parents, brothers; Joe (Magdalena) Danner, William (Anne) Danner, Clifford (Lorrine) Danner, Alfred (Marie) Danner, Leo (Betty) Danner, Jerome Danner and sister Rosalia (Albin) Schultes as well as his parent in law, John and Elizabeth Vogl. Brothers-in- law and sister-in-law; Leroy and Barb Vogl, Joseph Vogl, Michael Eich.

The family of Peter (Bud) Danner created this Life Tributes page to make it easy to share your memories.

Send flowers to the Danner family.