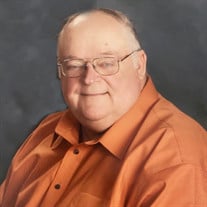 Paul Denis Pawletzki, 78 of Carroll, Iowa passed away on April, 17, 2020 in Des Moines Iowa. A private family funeral service will be held at Sharp Funeral Home in Carroll at 11 a.m., Wednesday, April 22, 2020. Officiating will be Fr. Tim Friedrichsen. Honorary Casket Bearers will be: Allison Pawletzki, Kenadie Wolterman, Kaylie Wolterman, and Lauren Pawletzki. Casket Bearers will be: Shawn Higgins, Taylor Higgins, Tanner Higgins, Rodney Hoffman, Loren Boyce, and Kenny Snyder. Burial will be in St. Francis Cemetery in Maple River with military honors conducted by the Arcadia American Legion. A Live Stream Broadcast and recording of Paul’s service can be found by visiting the Sharp Funeral Home Carroll, Iowa YouTube Channel at this link: https://www.youtube.com/channel/UCqd2eeRJk5RTdEJoEooUoAQ. An Icon on that page will be available by 10:55 a.m. Wednesday. Those wishing to mail their memorial may direct it to: Paul Pawletzki Memorial c/o Sharp Funeral Home, 226 W. 8th Street, Carroll, IA 51401. Funeral arrangements are under the guidance of the Sharp Funeral Home in Carroll, and online condolences may be left for Pauls’s family at www.sharpfuneral.com. The family intends to have a larger memorial service and reception for additional friends to celebrate Paul’s life after the state’s gathering restrictions have been rescinded. Paul was born in Carroll Iowa at St Anthony Hospital to Anthony and Mary (Barry) Pawletzki on August 29, 1941. He attended school in Carroll graduating from Kuemper in 1959. After graduating Paul enlisted in the Air Force and was stationed in Roswell, New Mexico. That is where Paul’s passion for airplanes started. During his time in the military Paul formed lasting friendships with Joe Carver, Bob Smuszkiewitz, Larry Newquiest and several other great men who he continued friendships up till death. Paul married the love of his life Jean (Snyder) Pawletzki on February 8, 1964 at St. Francis Church in Maple River. After they were united in marriage Paul and Jean moved to the farm in which Paul had lived on since he was 7 years old near Maple River. This is where Paul and Jean made their home and welcomed 4 children: Bill, Sheila, Steve and Beverly. In the upcoming years Paul farmed and milked cows. Many memories were formed on the farm and cherish those of milking cows and riding on the tractor with Dad. Paul continued his passion for airplanes in particular model airplanes. Many hours were spent in his airplane room preparing for Sunday night flying with the airplane guys. Paul loved this time with the guys and many Sundays sharing it with his family, but never letting us fly the airplanes because we could only look but never touch! Paul loved socializing and knew someone wherever he went. He went on to work at S&S store in Carroll, The Manor and St. Anthony Hospital where he retired from in. After retiring Paul drove bus for Western Iowa Transit. His gift to gab, his laugh, and endless jokes made a lasting impression on many and will be remembered always. Paul is preceded in death by his parents, Anthony and Mary (Barry) Pawletzki and parents- in-law, Norbert and Delores (Imming) Snyder. Paul is survived by his wife Jean Pawletzki of Carroll; his sister Betty (Dean) Friedrichsen of York, NE; his children: William (Beth) Pawletzki of Corpus Christi, TX, Sheila (Bill) Higgins of Arcadia, Steve (Stacie) Pawletzki of Scottsdale, AZ and Beverly Wolterman of Westside; his grandchildren: Shawn (Ellie) Higgins, Taylor Higgins (friend Cassie) and Tanner Higgins. Lauren and Allison Pawletzki. Kenadie and Kaylie Wolterman. Great Grandchildren: Emery Higgins and Avery Higgins. Several In-laws, Nieces, nephews and friends. The Family of Paul wishes to extend our sincere thanks to the Nurse’s and staff at Accura Nursing Home in Carroll for making our dad part of you family.

The family of Paul Pawletzki created this Life Tributes page to make it easy to share your memories.

Paul Denis Pawletzki, 78 of Carroll, Iowa passed away on April,...

Send flowers to the Pawletzki family.