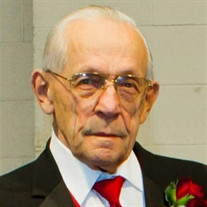 Paul Henry Oswald, 92, of Carroll, died, Wednesday, January 11, 2017 at the Hawkeye Care Center in Carroll. Mass of the Christian Burial will be celebrated at 10 a.m. Saturday, January 14, 2017 at St. Lawrence Catholic Church in Carroll. The Celebrant will be Fr. Craig Collison. Music will be by Kate Cuddy and the St. Lawrence Choir. Lector for the funeral mass will be Bev Vonnahme. Gift Bearers will be Paul’s children. Eucharistic Minister will be Florence Oswald. Casket Bearers will be: Clifford Neumayer, Tim Vogl, Ed Vogl, Tony Vogl, Pat Soyer and Mike Reicks. The Carroll 4th Degree Knights of Columbus will form an honor guard for the funeral mass. Burial will be in Mt. Olivet Cemetery in Carroll with military honors conducted by the Breda American Legion. Friends may call at the Sharp Funeral Home in Carroll after 4 p.m. on Friday where there will be a rosary at 4:30 p.m. by the Carroll 4th Degree Knights of Columbus followed by a Christian Wake Service at 6:30 p.m. by St. Lawrence Parish. The casket will be moved to St. Lawrence Church on Saturday morning where visitation will resume at 9 a.m. and continue until time of the funeral mass. Memorials may be left at the funeral home or the church for St. Lawrence Parish. Funeral arrangements are under the direction of the Sharp Funeral Home in Carroll and online condolences may be left for Paul’s family at www.sharpfuneral.com. Born on April 4, 1924 at Willey, Iowa, Paul was a son of Peter and Teresa (Goecke) Oswald. Paul grew up on farms near Willey and Mt. Carmel, attended school in Mt. Carmel and Arcadia and graduated from Arcadia High School in 1942. He entered service in 1945 and served until 1947. On June 21, 1950, Paul married Darlene Neumayer at St. Bernard's Church in Breda, Iowa. The couple made their home in Breda, Wall Lake and Carroll. Paul worked as a mechanic at several garages including Mt. Carmel, Breda, Wall Lake and Carroll. He worked as a mechanic, loader and eventually delivery driver for Old Home Bakery in Carroll. In his retirement he worked at the Carroll Golf Course. He was well known as a beautiful rosary maker. He made hundreds of rosaries, many from the roses from funeral memorial flower arrangements. He was a member of the Carroll 4th Degree Knights of Columbus, Breda American Legion and St. Lawrence Church. Paul is survived by his children, Danny Oswald of Carroll, Daryl (Joan) Oswald of South River, NJ, Donald (Nancy) Oswald of Omaha, NE, Deanne (David) Caulfield of Bellevue, NE, and David Oswald of Carroll; his granddaughter, Taylor Caulfield of Bellevue, NE; his brothers: Leon (Florence) Oswald of Carroll, William Oswald of Kyle, TX, Arthur (Virginia) Oswald of North Platte, NE; his sisters, Lola Heim of Sioux Falls, SD, Gladys Nieland of Breda, and Marge (Robert) Tigges of Carroll; his sister-in-law, Betty Oswald of North Palm Beach, FL; his stepbrother-in-law: Duane (Betty) Ludwig of Sioux Rapids, IA; his stepsisters-in-law, Norma Jean Ludwig of Vail, Mary Ludwig of Breda and Edna Ludwig of Carroll; as well as many nieces, nephews, other extended family and many friends. Paul was preceded in death by his wife, Darlene Oswald: his parents: Peter and Teresa (Goecke) Oswald; his parents-in-law, Tony and Mary Neumayer; his stepfather-in-law Tony Ludwig; his children: Joseph, Dennis, Mary, Elizabeth and Jerry; his sisters: Rita (Ray) Reicks, Maizie (Albert) Soyer, Dorothy (Ed) Vogl; his brothers: Charles Oswald and Louis Oswald; his brothers-in-law: Cletus Heim, and Norman Nieland; his brother-in-law and sister-in-law: Virgil (Betty) Neumayer; and his stepbrothers-in-law: Romaine Ludwig, Norman Ludwig and Orville Ludwig.

The family of Paul Oswald created this Life Tributes page to make it easy to share your memories.