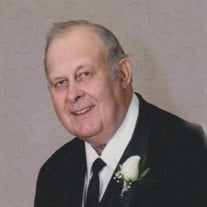 Paul Frederick Mescher, age 80, of Carroll (formerly of Halbur) died May 16, 2020 at Regency Park nursing home in Carroll. Due to COVID-19 restrictions, a private funeral service for immediate family only will be held at the Sharp Funeral Home in Carroll on Wednesday, May 20, 2020. Burial will be at St. Augustine Cemetery in Halbur with Military Honors conducted by the Arcadia American Legion. A Live Stream Broadcast and recording of Paul’s service can be found by visiting the Sharp Funeral Home Carroll, Iowa YouTube Channel at this link: https://www.youtube.com/channel/UCqd2eeRJk5RTdEJoEooUoAQ. An Icon on that page will be available by 10:55 a.m. on Wednesday. Funeral arrangements are under the guidance of the Sharp Funeral Home in Carroll and online condolences may be left for Paul’s family at www.sharpfuneral.com. Memorials may be left for the Paul Mescher family, c/o Sharp Funeral Home, 226 W. 8th St. Carroll, IA, 51401. Paul was born October 25, 1939 at his parents’ farm just outside Halbur. He grew up helping his dad on the farmstead, where his love for agriculture, livestock and red Farmall tractors began. Paul attended St. Augustine Catholic School in Halbur and graduated from Kuemper Catholic High School in Carroll in 1957. He served in the Army Reserves from 1962-1968, and he was a proud member of the American Legion. Paul met his wife of 57 years, Ruth Schettler, at a dance at the American Legion Ballroom in Arcadia, and the two married May 11, 1963 at Our Lady of Mt. Carmel Church, in Mt. Carmel. Paul worked for Albert Nepple Trucking for several years, then Juergens Produce and Feed and West Central Coop. His dream of having his own farming operation was realized in 1971 when the budding Mescher family moved to their farm five miles southwest of Halbur. Paul and Ruth raised nine kids on the farm, who all helped with various chores, including fieldwork and caring for the livestock. Paul was also an auctioneer and worked many farm and estate auctions. He also sold DeKalb seed corn and hydraulic livestock trailers on the side. In his later years, Paul worked for the U.S. Postal Service as a rural mail carrier. Paul’s faith was very important to him. Despite the financial pinch, he and Ruth insisted on sending all nine kids to Holy Trinity Catholic School in Halbur and Templeton and to Kuemper Catholic High School in Carroll. The family regularly attended St. Augustine Catholic Church in Halbur, where Paul was a lector and usher. Paul enjoyed spending time with his children and grandchildren, talking about agriculture, polka music, Busch Light and sour cream raisin pie. He also enjoyed calling Bingo for over 30 years at the annual Halbur Celebration to support the parish. Paul was inquisitive, kind and friendly to everyone he met. In fact, no one was a stranger to Paul, as he would quickly strike up a conversation with others. Even in retirement, Paul was a farmer through and through, regularly tuning in for the agriculture reports on radio and television. On drives, he enjoyed observing the status of the fields and crops, as well as the tractors and combines out working. He even enjoyed a few day trips to the livestock sale barns. Paul’s favorite television station was RFD-TV (“Rural America’s most important network”). It’s no coincidence that Paul’s last full day on earth, May 15, was the Feast Day of St. Isidore – the patron saint of farmers. Paul recently said to several of his adult children: “I’ve lived a good life. When the good Lord says it’s time, I’m ready.” Paul is survived by his wife of 57 years, Ruth (Schettler) Mescher, his nine children: Michele (and Bob) Worden of Omaha, NE; Lisa (and Dick) Schlueter of Overland Park, KS; David Mescher of Granger; Amy Price of Ankeny; Pat (and Wendy) Mescher of Halbur; Jody (and Chuck) Geest of Ankeny; Brenda (and Kelly) Foley of Maple River; Kelly (and Jason) Collins of Waukee; and Nick (and Paige) Mescher of Ankeny. He is also survived by 19 grandchildren: Faith and Lexie Worden; Calvin and Peyton Schlueter; Paige, Aubrey and Lindsay Mescher; Steve and Madison Price; Hannah and Kirsten Mescher; Miranda and Lincoln Geest; Vanessa, Brooklyn, Tristan and Ashlyn Foley; and Katelyn and Nolan Mescher. Survivors also include his sister Bernie (and Tom) Worrell of Miami, Florida; sister-in-law Sharon Mescher of Halbur, Joan Danzer of Carroll and Mel Schettler of West Des Moines and numerous nieces and nephews. He is preceded in death by his parents, Albert and Ann Mescher; his sister and her husband, Darlene and Paul Bruch; and brother, Jerry Mescher. He is also preceded in death by his parents-in-law, Eugene and Clara Schettler; brothers and sisters-in-law: Lawrence and Irma Frischmeyer, Irene and Bob Reynolds, Donna Schettler, Ed Schettler, Elmer Schettler and Ed Danzer.

Paul Frederick Mescher, age 80, of Carroll (formerly of Halbur) died May 16, 2020 at Regency Park nursing home in Carroll. Due to COVID-19 restrictions, a private funeral service for immediate family only will be held at the Sharp Funeral... View Obituary & Service Information

The family of Paul Mescher created this Life Tributes page to make it easy to share your memories.

Send flowers to the Mescher family.