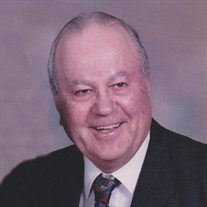 Otmar Bierl, 99 of Arcadia, died Wednesday, December 8, 2021, at St. Anthony Nursing Home in Carroll. Mass of the Christian Burial will be celebrated at 10:30 a.m., Monday, December 13, 2021, at St. John Catholic Church in Arcadia. The Celebrant will be Fr. Gary Snyder. Concelebrant will be Fr. Richard Remmes. Music will be by Jane Heithoff and the St. John Choir. Lectors for the Funeral Mass will be Macy Wiederin and Kerry Lengeling. Gift Bearers will be Amy Wiederin, Rachel Kitt, Katie Crichton, Nicky Bierl, and Jenny Irlmeier. Casket Bearers will be Michael Dietzenbach, Paul Dietzenbach, Wes Bierl, Matt Bierl, Mike Bierl, Chad Irlmeier, Brian Irlmeier, Jeff Bierl, and Nick Bierl. Burial will be in St. John Cemetery in Arcadia. Visitation will be held on Sunday, December 12, 2021, from 3-6 p.m. at the Sharp Funeral Home in Carroll. There will be no visitation on Monday prior to the Funeral Mass. Funeral arrangements are under the guidance of the Sharp Funeral Home in Carroll and online condolences may be left for Otmar’s family at www.sharpfuneral.com. Otmar “Ottie or O.J.” was born May 27th, 1922, to Anton and Philomena (Loxterkamp) Bierl near Templeton, Iowa. At the age of 12 he moved to Arcadia, Iowa and attended St. John’s Grade School. Upon graduation from 8th grade, he began farming on the family farm. On November 21st, 1944, at St. Bernard’s Catholic Church in Breda, Iowa he was united in marriage to Elaine Koster. They farmed and raised livestock until retiring in 1985 when they moved into the town of Arcadia. During his farming days he farmed with horses until he bought his first new tractor – a 1938 John Deere B. He raised cattle and hogs and made many cattle buying trips to Nebraska and the Dakota’s. After the kids were older, Elaine was able to join him on these trips. He enjoyed time spent with family and friends telling them stories of his younger days. He loved to play cards (when he played Booray it could get quite noisy), going to casinos and playing Blackjack, watching his Boston Red Sox (a fan his whole life) and the Iowa State Cyclones, watching old westerns, reading, and he enjoyed a good rare steak. His favorite pastime from his younger days was hunting and fishing. Even though he was retired from farming, he still enjoyed helping when he could on the farm and doing some roadside farming. In 2021 he had the honor of being the Grand Marshall for the Arcadia Quasi Centennial. He is survived by his five children: Jan (Don) Dietzenbach of Evergreen, CO; Leon (Alyce) Bierl of Arcadia; Ron (Sharon) Bierl of Arcadia; Nadine (Dave) Irlmeier of Manning; and Dale (Joyce) Bierl of Arcadia. His grandchildren: Michael Dietzenbach, Paul Dietzenbach, Nicky Bierl, Wes (Alicia) Bierl, Matt (Kelly) Bierl, Amy (Tom) Wiederin, Rachel (Scott) Kitt, Mike (Lindsey) Bierl, Katie (Trevor) Crichton, Jenny Irlmeier, Chad (Cynthia) Irlmeier, Brian Irlmeier, Jeff (Bri) Bierl, Kerry (Mike) Lengeling, Nick Bierl (Kelsey Clausen) and 23 great-grandchildren. His in-laws Urban and Pat Koster, Anita and Duane Hannasch, Myrna and Van Schmidt, Alice Thielen and many nieces and nephews. He was preceded in death by his wife Elaine, his parents Anton and Philomena Bierl, his sisters Veronica (Frank) Kemper, Irene (Louie) Bueltel, Pauline Bierl, Dorothy (Leo) Bueltel. His wife’s parents, Clem and Hazel Koster, his in-laws Floyd and Terry Koster, Edgar and Delores Koster, Pearl and Irvin Staiert, Alma and Ivan Schroeder, Helen Bertrand, Joe and Jean Koster, Father Dale Koster, Norma Jean and Romaine Ludwig and Frank Thielen.

The family of Otmar Bierl created this Life Tributes page to make it easy to share your memories.

Send flowers to the Bierl family.