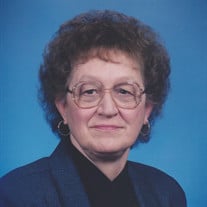 Otillia “Tillie” Reineke, 93 of Carroll, died Wednesday, August 29, 2018 in Plattsmouth, Nebraska. Mass of the Christian Burial will be celebrated at 10:30 a.m., Tuesday, September 4, 2018 at St. John Paul II Parish – Holy Spirit Church in Carroll. The Celebrant will be Fr. Kevin Richter. Mass servers will be Matthew Reineke, Jacob Curtis, and Andrew Pujado. Music will be by Barb McDermott and the Holy Spirit Choir with Christian and Laurie Pujado singing “Ave Maria”. Lector will be Raymond Reineke. Gift Bearers will be Pamela Curtis, Laurie Pujado, and Sue Kutschkau. Eucharistic Ministers will be Janice Reineke, Mary Reineke, and Jackie Reineke. Casket Bearers will be Bill Reineke, Ben Reineke, Mark Reineke, Michael Reineke, James Reineke, David Reineke, Glen Reineke, Neil Reineke, and Scott Reineke. Burial will be in Mt. Olivet Cemetery in Carroll. Friends may call at the Sharp Funeral Home in Carroll after 4:30 p.m. on Monday where there will be a rosary at 5 p.m. and a Christian Wake Service at 6 p.m. The casket will be moved to Holy Spirit Church on Tuesday morning where additional visitation will be held from 9:30-10:15 a.m. In lieu of flowers memorials may be left at the funeral home or the church for the Reineke family for a later designation. Funeral arrangements are under the direction of the Sharp Funeral Home in Carroll and online condolences may be left for the Reineke family at www.sharpfuneral.com. Otillia “Tillie” Reineke was born on September 27, 1924 near Coon Rapids, Iowa, the daughter of John and Anna (Muhr) Lengel. She grew up near Coon Rapids, and attended Annunciation Catholic School. On April 10, 1945, Tillie was united in marriage to Edward Reineke at Annunciation Catholic Church in Coon Rapids. The couple made their home southeast of Dedham where they were active in grain and livestock farming. On December 1, 1952 Tillie and Edward moved to their farm south of Carroll. Tillie remained there until Ed’s death on June 16, 1975. Shortly thereafter she moved to Carroll, where she worked at the Elks Lodge, and volunteered at New Hope Village and St. Anthony Hospital. Tillie enjoyed walking, fishing, quilting, embroidery, and bingo. She had a special love for animals. She was an avid gardener until her health no longer permitted her. Tillie was a member of St. John Paul II Parish, Holy Spirit, and a member of the Holy Spirit Ladies Guild. Left to celebrate Tillie’s life are her four sons: Ronald (Mary) Reineke of Plattsmouth, NE, Richard (Mary) Reineke of Springfield, NE, Raymond (Janice) Reineke of Council Bluffs, and Russell Reineke, and his special friend Linda Collins of Carroll; 13 grandchildren; 42 great-grandchildren; one great-great-grandchild; sister-in-law: Marie Nieland of Storm Lake; and Tillie’s good friend, Jackie Reineke of Carroll; as well as many nieces, nephews, and other extended family members. Tillie was preceded in death by her husband Edward on June 16, 1975; son Robert Reineke on April 25, 2008; grandson Dale Reineke in 2001.

The family of Otillia "Tillie" Reineke created this Life Tributes page to make it easy to share your memories.

Send flowers to the Reineke family.