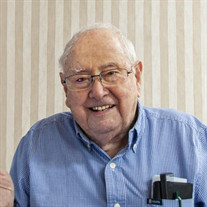 Omer Langenfeld, 103, of Carroll, passed away on Tuesday, December 21, 2021 at St. Anthony Nursing Home in Carroll. A private family Mass of Christian Burial will be held at Holy Spirit Catholic Church in Carroll. The celebrant will be Fr. Kevin Richter. Music will be by Kathy Halbur and Kathleen Macke. Lector will be Alan Langenfeld. Gift Bearers will be Shelly Klemmer and Crystal Klemmer. Eucharistic Minister will be Pam Kraus. Casket Bearers will be Mark Kraus, Ben Kraus, Tony Kraus, Chris Schnell, Josh Young, and Mario Salazar. Burial will be in Mt. Olivet Cemetery with Military Honors conducted by the Carroll American Legion. In lieu of flowers memorials may be made to the Community of Concern Food Bank in Carroll or a charity of your choice. Funeral arrangements are under the guidance of the Sharp Funeral Home in Carroll, and online condolences may be left for Omer’s family at www.sharpfuneral.com. Omer “Doc” Langenfeld was born in Carroll, Iowa on September 8, 1918 to Casper and Anna (Petsche) Langenfeld. He married Grace Schulte on June 24, 1943 at Saints Peter and Paul Catholic Church in Carroll. Omer worked for Carroll Electric Light and Power before entering the Navy in 1941. After four years of military service during WWII, he worked for Heider Manufacturing in Carroll until his retirement upon its closure in 1983. He served on the Carroll City Planning and Zoning Commission and later served seven years as a city councilman. Omer had a remarkable memory and could recall names and places from over 80 years ago. People were amazed with his recall and he always had a joke to fit any situation. He had an abundance of stories to share from his service days. He was always curious and enjoyed repairing, tinkering and inventing. He was an accomplished welder and machinist, and taught himself TV repair which he did as an after-hours job for many years. Some Carroll residents may still have the clotheslines he designed, fabricated and installed. Omer also worked with Doc Collison on the restoration of two antique Heider tractors. In addition, he enjoyed tackling mechanical puzzles of all kinds and never found one he couldn’t eventually solve. Omer spent the last eight months as a resident of St Anthony’s Nursing Home in Carroll. He knew the staff well from visiting Grace daily during her eight-year stay at the same nursing home. He died peacefully in his sleep on December 21, 2021. He was preceded in death by his parents Casper and Anna; step mother Margaret; wife Grace; son-in-law Pat Young; great grandchildren Zach Kach and Amanda Ficek; siblings Felix, Elmer, Marie, Lorene and Vincent; step siblings Albert and Louis Nagl and Florence Nagl Westendorf; and half sister Helen Langenfeld Meyers. Omer is survived by sons Alan Langenfeld (Karen) of Cedar Rapids and Don Langenfeld (Holly) of Sagle, ID; daughters Kathy Young of Rochester, MN; Mary Lou Klemmer (Dan) of Dublin, OH; and Jean Galasso of Des Moines; 12 grandchildren, 15 great-grandchildren and three great-great grandchildren.

Omer Langenfeld, 103, of Carroll, passed away on Tuesday, December 21, 2021 at St. Anthony Nursing Home in Carroll. A private family Mass of Christian Burial will be held at Holy Spirit Catholic Church in Carroll. The celebrant will be Fr.... View Obituary & Service Information

The family of Omer Langenfeld created this Life Tributes page to make it easy to share your memories.

Omer Langenfeld, 103, of Carroll, passed away on Tuesday, December...

Send flowers to the Langenfeld family.