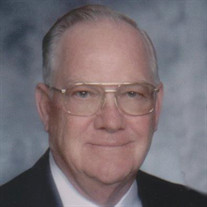 Norman Thelen, age 89, of Carroll, Iowa passed away on Sunday, February 11, 2018 at St. Anthony Nursing Home in Carroll. Mass of the Christian Burial will be celebrated at 10:30 a.m. Friday, February 16, 2018 at Holy Spirit Catholic Church in Carroll. The celebrant will be Fr. Kevin Richter. Music will be by Barb McDermott and the Holy Spirit Choir. Mass Servers will be Norman’s grandsons: Nick Gerdes, and Alex Gerdes. Lectors will be Norman’s grandson, Christopher Thelen, and Norman’s Goddaughter Susan Boes. Gift Bearers will be Norman’s granddaughters: Melissa Meyer, Karisa Thelen, Kaitlyn Thelen, and Miranda Gerdes. Eucharistic Minister will be Norman’s daughter Julie Gerdes. Casket Bearers will be Norman’s grandsons: Christopher Thelen, Andrew Thelen, Daniel Thelen, Brandon Steinkuehler, Tanner Thelen, Trey Jackson, Alex Gerdes, Nick Gerdes, Nathan Thelen, and Zachary Thelen. Burial will be at 1:30 p.m. at St. Ann’s Cemetery in Vail. Friends may call at Holy Spirit Church in Carroll after 4 p.m. on Thursday, where there will be a Rosary prayed at 5 p.m., and a Christian Wake Service will be held at 6:30 p.m. Visitation will resume at Holy Spirit Church on Friday morning at 9:30 a.m., and it will continue until the time of the funeral mass. In lieu of flowers memorials may be directed to the Holy Spirit Sisters. Funeral arrangements are under the direction of the Sharp Funeral Home in Carroll, and online condolences may be left for Norman’s family at www.sharpfuneral.com. Norman was born on January 16, 1929 to Sylvester and Mathilda (Neuerburg) Thelen. He was born and raised on the family farm northeast of Mt. Carmel, Iowa where he attended school. After his father’s death Norman and some of the older siblings worked together to help their mother take care of the family farm and raise the younger children. Norman was united in marriage to Marleen Schloesser on August 6, 1956 at St. Ann Church in Vail. After their marriage they resided in Carroll where they lived until 1965. During this time Norman worked various jobs. In March of 1965, Norman bought a farm south of Westside where he raised corn, beans, oats, hay, cattle, and hogs. He was most proud of his farrow-to finish hog operation and later years selling feeder pigs. He stopped raising hogs in 1993 but continued to farm the land through the 2004 growing season. Norman often credited Marleen’s income earned as an RN at St. Anthony Regional Hospital (where she was employed from 1956 to 1972) as the means that allowed him to get back to farming. Her nursing career helped to sustain their family during those first years on their own farm. After almost 40 years on the farm, they sold the farm and retired to Carroll in August 2004. They enjoyed celebrating their 50th wedding anniversary in 2006 with family and friends before Marleen passed in May of 2008. Norman and Marleen enjoyed traveling to see family and friends, visiting and playing cards-especially Euchre. Their most memorable trip was in 1984 when they toured France and Portugal. Yearly family vacations were fond memories. Norman has often impressed others by his great memory and math skills. Norman was always appreciative of the compassionate and loving care received at St Anthony Nursing Home. He enjoyed visiting and joking with the staff, residents, and family. He often went to daily mass and enjoyed bingo and trivia. Norman was preceded in death by his parents; wife Marleen; three siblings who died in infancy: Dorothy, Victor and Melvin Thelen; sisters Linda Hoffmann and Marcile Hoffman; brothers Gerald Thelen, Eugene Thelen and Norbert Thelen; sisters-in-law Mayvis Thelen, Donna Thelen and Diane Schloesser; and brothers-in-law Alfred Hoffman, John Hoffmann, Allan Ludwig, and Marvin Huelsing. Survivors include his and Marleen’s five children, son Joseph (Cherith) Thelen of Denison, son James (Alanna) Thelen of Denison, son Jeffrey Thelen of Carroll, son Thomas (Pamela) Thelen of Chesterfield, MO and daughter Julie (David) Gerdes of Lake View; 14grand-children and 8 great- grandchildren; siblings Sylvester (Kay) Thelen of Templeton, Ralph Thelen of Leesburg, FL, Lawrence (Cecelia) Thelen of Vail, Mary Ludwig of Carroll and Lynette (Mike) Schaffer of Omaha, NE; brothers-in law and sisters-in-law Florence Thelen of Atlantic, Kay Thelen of Marshalltown, Jean Thelen of Anita, Madelyn Huelsing of Maple River, Martin (Kay) Schloesser of Calhan, CO, Melvin Schloesser of Casa Grande, AZ, Mary (Tim) Gilligan of Gretna, NE, Michael Schloesser of Calhan, CO and Dorothy (Leroy) Childress of Denison as well as many nieces, nephews and other extended relatives.

The family of Norman Thelen created this Life Tributes page to make it easy to share your memories.

Norman Thelen, age 89, of Carroll, Iowa passed away on Sunday,...

Send flowers to the Thelen family.