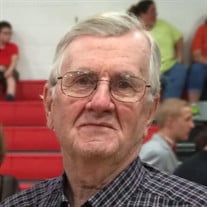 Norbert Andrew Kirsch, 83, of Carroll, Iowa passed away, March 22, at Accura HealthCare of Carroll. Mass of the Christian Burial will be celebrated at 10:30 a.m., Friday, March 25, 2022 at Holy Spirit Church – St. John Paul II Parish in Carroll. The Celebrant will be Fr. Kevin Richter. Music will be by Kathy Halbur and Sherry Loughran. Lector and Eucharistic Minister will be Sister Caroline Kirsch FSPA. Gift Bearers will be Morgan Kirsch, Conner Kirsch, and Braeden Kirsch. Casket Bearers will be Conner Kirsch, Braeden Kirsch, Josh VanSchepen, Nick Kirsch, Shawn Kirsch, Tanner Kirsch, Daniel Jeppesen, and Nathan VanSchepen. Burial will be at 1:15 p.m., Friday in Holy Family Cemetery in Lidderdale with military honors conducted by the Carroll American Legion. Visitation will be from 9:30-10:15 a.m. on Friday at Holy Spirit Church. Funeral arrangements are under the guidance of the Sharp Funeral Home in Carroll and online condolences may be left for Norbert’s family at www.sharpfuneral.com. Norbert, the son of Nicholas Andrew and Mary Ann (Wiskus) Kirsch, was born on July 5th, 1938 on a farm near Roselle, Iowa. He attended grade school in Roselle. Following grade school, Norbert went on to complete high school at St. Henry’s Seminary in Belleville, Illinois. After Graduation, Norbert entered the Marine Corps and was stationed in Fallbrook, California. He served there as a private first class; later, he was promoted to Corporal. In 1960, he married Mary Louise Cale of Carroll, Iowa. The couple’s first two children were born during his military term. Following Norbert’s time in the service, the couple returned to Roselle, Iowa with their young family. During that time he worked at WP Johnson Manufacturing, commuting to Des Moines daily. And later, as a hired hand on a farm in Manning, Iowa. By this time, their family had added three children. After various moves, Norbert’s family, which had grown to six children, settled in Templeton, where Norbert began highway 41 sales. It would be the start of what Norbert loved doing, buying and selling machinery, small antiques, and various second hand items. That passion would follow him the remainder of his life. The couple’s final move led them back to Carroll. Where Norbert became active as eucharistic minister to Carroll nursing homes and shut-ins. April 19, 2021 Norbert and Mary Lou celebrated 61 years of marriage. She was his faithful companion through the trials and the triumphs of his life. He loved her deeply. Norbert loved his heavenly Father. He loved the rosary. He loved his family. He loved drives around Swan Lake searching for deer, especially with his grandkids. He loved watching the birds in his front yard. He loved his grandchildren. He loved Teresa Brewer. And he loved sitting alongside his wife cheering for the Ar-We-Va Rockets. Norbert is survived by his wife Mary Lou Kirsch of Carroll; his children: Christine Jeppesen of Kansas City, Timothy Kirsch of May City, Bruce (Joni) Kirsch-Sievers of Storm Lake, Scott (Katrina) Kirsch of Connellsville, PA and Lynette (Bradford) Hindt of Rock Rapids; 11 grandchildren; 10 great-grandchildren; his siblings: Victor (Rosemary) Kirsch of Adams, NY, Sister Caroline Kisch FSPA of La Crosse, WI, Lawrence (Donna) Kirsch of Aurora, CO, Allan Kirsch of Ridgefield, WA, JoAnn Cale of Carroll, Leonard Kirsch of Mt Airy, NC, and Dorie (Larry) Bruening of Brynes Mill, MO; his sister-in-law, Marikay Kirsch of Mason City as well as many nieces, nephews, and other extended relatives. Norbert was preceded in death by his parents; his son Jeffrey Kirsch; his son-in-law, T.J. Jeppesen; his parents-in-law, Loren and Lena Cale; his brothers, Marvin Wiskus, Kenneth Kirsch and Nicholas Kirsch in infancy; and his brothers-in-law and sisters-in-law: Ray Cale, Glenda Kirsch, Elsie Wiskus, Patricia Kirsch, and Frank Cale. And, David, thank you for being loving and caring for someone we loved so deeply. You will forever be a part of this family and be carried in our hearts.

The family of Norbert Kirsch created this Life Tributes page to make it easy to share your memories.

Send flowers to the Kirsch family.