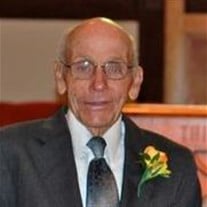 Norbert “Fiddle” Grote, age 86, of Carroll, formerly of Glidden, died early Thursday morning, November 1, 2018 in Carroll, Iowa. Mass of the Christian Burial will be celebrated at 10:30 a.m. Tuesday, November 6, 2018 at St. John Paul II Parish – St. Lawrence Church in Carroll. The Celebrant will be Fr. Shinoj Jose. Music will be by Kate Cuddy and the St. Lawrence Choir. Lectors will be Julia Cantu and Taylin Wittrock. Gift Bearers will be Victoria, Natalie, Tianna and Tiffany Wittrock, and Dacoda and Dawson McCrea. Eucharistic Minister will be Joe Kemper. Casket Bearers will be Doug Wittrock, Dave McCrea, T.J. Schouten, Jorge Cantu, Henry Cantu, Dustin Veldhuizen, and Matt McLaughlin. Burial will be at Mt. Olivet Cemetery in Carroll with military honors conducted by Breda American Legion. Friends may call at the Sharp Funeral Home in Carroll after 4 p.m. on Monday where there will be a Carroll Knights of Columbus Rosary at 5 p.m., and a Christian Wake Service at 7 p.m. The casket will be moved to St. Lawrence Church on Tuesday morning, where visitation will resume from 9:30 to 10:15 a.m. Memorials may be left at the funeral home or the church for Kindred Hospice. Funeral arrangements are under the direction of the Sharp Funeral Home in Carroll, and online condolences may be left for Fiddle’s family at www.sharpfuneral.com. Norbert, the son of Herman and Colette (Schettler) Grote, was born on November 26, 1931 at St. Anthony Hospital in Carroll, Iowa. He grew up west of Mt. Carmel, and graduated from Our Lady of Mt. Carmel School in 1949. On May 4, 1953, Fiddle was inducted into the United States Army, serving during the Korean Conflict. He was a member of the 10th Medium Tank Battalion, stationed from Camp Chaffee, Arkansas. He was honorably discharged on March 5, 1955. After his honorable discharge, he returned to the Carroll area where he began farming. On June 17, 1961 he was united in marriage to Marlita Kemper at Sacred Heart Catholic Church in Templeton. The couple made their home east of Carroll. In addition to farming, Fiddle clerked for Farmers Livestock Auction for many years. He also sheared sheep, dehorned cattle, and was an order-buyer of cattle for several area farmers. Fiddle enjoyed playing cards, and trips to the casino. Most of all he enjoyed gardening, and sharing his bountiful produce with many neighbors, family, and friends. Left to celebrate Norbert’s life is his children: Laura (Dennis) Mayer of Lindale, Texas, Susan (Robert) VanScoy of Grimes, Teena (Jorge) Cantu of San Antonio, TX, Thomas (Mary) Grote of Audubon, and Jacklyn Grote of Carroll; 9 grandchildren; and 12 great-grandchildren. Also surviving are his siblings: Jack (Doreen) Grote of Carroll, James (Mary Ann) Grote of Cave Creek, AZ, Bill (Nancy) Grote of Withee, WI, Ted (Peggy) Grote of Gibson City, IL, Jeane (John) Rosener of South Sioux City, NE, Mary (Leonard) Sailer of Manning, Alice (John) Hamilton, of Jefferson, Judy (Duane “Butch”) Olberding of Iowa Falls; sister-in-law: Joyce Grote of Minooka, IL; brother-in-law: Lyle Vonnahme of Carroll; as well as many nieces, nephews, and other extended family. Norbert was preceded in death by his Wife, Marlita in 1985; two children in infancy: Gerald and Theresa; his parents, Herman and Colette Grote; his brothers: Paul, Ralph, and Leonard Grote; his sister: Lorraine Vonnahme; and a sister-in-law: Irma Grote.

The family of Norbert "Fiddle" Grote created this Life Tributes page to make it easy to share your memories.