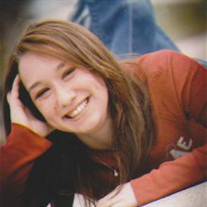 Neysa Siepker, age 24, of Carroll, passed away unexpectedly, on Monday, June 25, 2018, at her home in Carroll. Public visitation will be held on Thursday, July 5, 2018 from 4 until 7 p.m. at the Sharp Funeral Home in Carroll. There will be a time of sharing at 7 p.m. A private family Funeral Service will be held on Friday, at the Sharp Funeral Home in Carroll. Fr. Brian Feller of St. John Paul II Parish will officiate. Casket Bearers will be Sara Siepker, Rob Lavin, Dan Snyder, Glen Snyder, Alan Snyder, and Doug Snyder. Burial will be in St. Bernard’s Cemetery in Breda. In lieu of flowers, memorials may be left at the funeral home to be made in Neysa’s name for a later memorial contribution. Funeral arrangements are under the direction of the Sharp Funeral Home in Carroll, and online condolences may be left for Neysa’s family at www.sharpfuneral.com. Neysa was born on May 25, 1994 at Scottsdale, Arizona, the daughter of Brian and Lisa (Snyder) Siepker. At a very young age the family returned to the Carroll Community where Neysa was raised. At the age of 13 Neysa was diagnosed with epilepsy. It was a difficult journey in the beginning, but she learned to not let it define her or determine the path of her life. Neysa graduated from Carroll High School in 2013. While in high school Neysa was active as a manager for the football and soccer teams. She enjoyed the social aspect of school, but hitting the books was not her strong suit as she would say. Following her formal education Neysa worked at New Hope Village, and later Pizza Ranch, which would become her home away from home. She enjoyed her co-workers, and interacting with the people. Neysa loved the hustle and bustle and the “goodies” that came at the end of the night. Neysa enjoyed puzzles, Sudoku, coloring with her sister Olivia, video games, billiards, Netflix, and music of any kind. She enjoyed any game but especially the games that she played with her “social” friends when they were enjoying the nightlife. Neysa played Volleyball with her dad on the American Home Shield Team. She loved being a part of the team. Neysa was a talker and could spark up a conversation very easily. She had a heart of gold and would take the time to visit or just give a hug. Her family was very important to her, and she was proud to be a daughter, and sister. When she did not see them daily, she would call or text just to say “hi” or “what’s up”. Left to cherish her life are her parents: Brian and Lisa Siepker of Carroll; her sisters: Olivia, Sara, and Emerald Siepker all at home; paternal grandfather: Larry Siepker of Carroll; paternal grandmother: Jeanne (Kenny) Thorley of Wickenburg, AZ; as well as numerous aunts, uncles, cousins, and many friends. Neysa was preceded in death by her maternal grandfather: Roger “Rocker” Snyder, and her maternal grandmother: Bette Snyder. If there was one memory we could leave you, is that Neysa had a huge heart for people, especially her family. She was so proud of her sisters, and all they were accomplishing in their lives. She loved to kiss and hug, and usually was not the first one to let go. Neysa had a tattoo on her shoulder. It was a quill that spread out into birds flying, and with it, it said: “sometimes you have to fall before you can fly.” You test out those new wings now Nees, they are all yours.

Neysa Siepker, age 24, of Carroll, passed away unexpectedly, on Monday, June 25, 2018, at her home in Carroll. Public visitation will be held on Thursday, July 5, 2018 from 4 until 7 p.m. at the Sharp Funeral Home in Carroll. There will be... View Obituary & Service Information

The family of Neysa Siepker created this Life Tributes page to make it easy to share your memories.

Send flowers to the Siepker family.