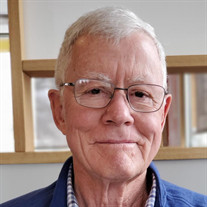 Neil Ludwig 77, of Carroll, passed away Friday, May 14, 2021 at his home in Carroll with family by his side. Mass of the Christian Burial will be Celebrated at 10:30 a.m., Friday, May 21, 2021 at St. John Paul II Parish – Holy Spirit Church in Carroll. The Celebrant will be Fr. Kevin Richter. Music will be by Jane Heithoff and the Holy Spirit Choirs. Lectors for the Funeral Mass will be Ann Rossigno and Christopher Ludwig. Honorary Gift Bearers will be Julia and Alex Rossigno and Virginia Quinn Ludwig. Eucharistic Minister will be Ann Rossigno. Honorary Casket Bearers will be Wayne Bellinghausen, Don Bernholtz, Ray and Ruth Brincks, Larry Bruning, Dave Hopper, James Myrtue, Ron Odendahl, Wayne Seaman, Denny Tigges, George Towers, Wayne Zimny. Casket Bearers will be Christopher Ludwig, Craig Ludwig, Michael Ludwig, Steve Rossigno, Julia Rossigno, and Alex Rossigno. Burial will be at 1:30 p.m. Friday in St. John’s Cemetery in Arcadia with military honors conducted by the Arcadia American Legion. Visitation will be held from 4-6:30 p.m. on Thursday at the Sharp Funeral Home in Carroll. At 6:30 p.m. there will be a sharing of memories followed by the Holy Family School of Faith Meditation Rosary. Those attending the Funeral Mass are required to wear a face covering. Memorials may be left at the funeral home or the church for Kuemper Catholic Schools Foundation. Funeral arrangements are under the guidance of the Sharp Funeral Home in Carroll and online condolences may be left for Neil’s family at www.sharpfuneral.com. A live-stream of Neil's service can be viewed at the following link: https://youtu.be/n992Fb-kC8E Neil was born on May 31, 1943 in Carroll, Iowa, son of Raymond and Regina (Huelshorst) Ludwig. He grew up in Arcadia, Iowa, attended St. John Grade School, and graduated from Kuemper High School. Besides assisting on the family farm and setting pins at the local bowling alley, Neil enjoyed working with the employees at the Farmers Cooperative Elevator in Arcadia. Upon graduating high school, Neil served for 5 years in the US Coast Guard and received an honorable discharge as an E3 (Electronics Technician) in 1966. His years in the Coast Guard instilled a desire for travel and adventure. On September 17, 1966, Neil married his lifetime friend, Jean Schweers. They set up their home in Carroll, where they joined Saint Lawrence Catholic Church and later Holy Spirit Catholic Church. They embarked on a journey marked by many adventures. Neil worked as an electrician for a year, before being hired as a lineman for Iowa Public Service, now MidAmerican Energy. He served there for 37 years, repairing ice storm damage, answering midnight calls for power outages, and repairing power lines. Safety was always a major concern for Neil and his coworkers. He was grateful for the support and knowledge of his crew. Neil enjoyed many interests including piloting airplanes, scuba diving, motorcycle riding, traveling and camping with family as well as woodworking. A very handy person, Neil loved helping his family with projects. Whenever he traveled to see family, his toolbox came along. Friday night motorcycle rides were highlights of summer. However, the annual ride through the Black Hills each Memorial Day weekend, rain, or shine, was more like a “Wild Hogs” experience. Golfing with Jean and with friends was a highlight of retirement along with coffee at the Hy-Vee or McDonald’s ‘Schools of higher learning’. Covid restrictions during the summer of 2020 caused the group to meet at Minchen Park where the learning continued. Neil was a member of St. John Paul II Parish – Holy Spirit Church in Carroll and the RPM Club. Neil is survived by his wife, Jean, son Christopher of Cedar Rapids, son Craig married to LeAnn (Burkle) of Johnston, daughter Ann married to Steve Rossigno with children Julia & Alex of Richardson, Texas, and son Michael married to Dr. Amanda Zangrillo with daughter Virginia Quinn Ludwig of Omaha, Nebraska and many nieces and nephews. He is also survived by his brother Dale (Patty) of Keokuk, brother Jim (Annette) of Shelby Township, Michigan, and sister Diane Jennings of Sommerville, Tennessee. Also surviving are in-laws Dale and Virginia Schweers of Arcadia, Steve and Cathy Schweers of Marietta, Georgia, and Elizabeth Frangedakis of Sioux Falls, South Dakota. Neil was preceded in death by his parents, his parents in law Clarence and Babe Schweers, his brothers in law, Charles Jennings and George Frangedakis, and his nephews, Ray Ludwig & James Ludwig.

The family of Neil Ludwig created this Life Tributes page to make it easy to share your memories.