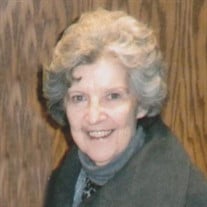 Nancy Anne (Cook) Kerwin passed away February 27, 2021 at Oakview Nursing Home in Conrad, Iowa, where she had resided for three years. A private family Mass of Christian Burial will be celebrated at 10:30 a.m., Tuesday, March 2, 2021 at St. John Paul II Parish – Holy Spirit Church in Carroll. The celebrant will be Fr. Timothy Johnson. Music will be provided by Jane Heithoff, with David Bartling providing special music. Lectors for the service will be Kathryn Bartling and Dr. Robert Strother. Casket Bearers will be Dr. Robert Strother, Dr. Ralph Strother, David Bartling, and Larry “Doc” Sporrer. Burial will follow at Mt. Olivet Cemetery in Carroll. Arrangements are under the guidance of Sharp Funeral Home in Carroll and online condolences may be left at www.sharpfuneral.com. A live-stream of the service will be available at the following link beginning at 10:10 a.m.: https://youtu.be/SoNa1hCx1Zo Nancy was born on July 31, 1932, in Davenport, Iowa at the height of the Depression to Howard L. and Agnes A (Glanz) Cook. Jobs were difficult so it meant many moves. Nancy attended parochial schools in Muscatine, Dubuque, Mason City, Davenport, Sac City, and graduated from St. Mary’s High School in Storm Lake. Freshman year was spent at Clarke College in Dubuque before transferring to Creighton University in Omaha, Nebraska where she graduated with her degree. It was there that she met and married James F. Kerwin in 1954. Nancy worked at Catholic Charities in Omaha before the couple moved to Carroll in 1955 as Jim began his long career at Commercial Savings Bank. Nancy was very much for anything that had to do with her home. She was a skilled seamstress, needle worker, painter, gardener, and decorator. She loved going to antique shops and auctions to find furniture to refinish and make her own with her impeccable style. In addition, Nancy used these talents to help beautify her parish church during the various liturgical seasons. She spent several years as the Carroll Public Library Children’s Librarian as she was an avid reader, as well. Travel was also an interest of Nancy’s, especially her trips to Ireland, England, Scotland, and Italy. The Kerwin’s lived at 601 East First Street for over 60 years in the home that she dearly loved. There, Nancy and Jim raised their two daughters. Nancy felt her family was short on people, but long on love where she always surrounded her family with total love. She relished her roles as mother and especially nana to her two grandchildren and three great grandchildren. Nancy was preceded in death by her parents, baby sister Sally, parents-in-law, husband, and her elder daughter, Michele A., a respected teacher at Kuemper High School. Survivors are her daughter Patrice K. Strother (Dr. Ralph); granddaughter Kathryn Bartling (David); grandson Dr. Robert K. Strother (Dr. Courtney); great grandchildren Cora M. Bartling, Jon F. Bartling, and Fynn T. Bartling; her sisters-in-law Sr. Maris Kerwin – FSPA, Kathleen (Lee) Ogle; and a longtime family friend, Larry L. Sporrer.

Nancy Anne (Cook) Kerwin passed away February 27, 2021 at Oakview Nursing Home in Conrad, Iowa, where she had resided for three years. A private family Mass of Christian Burial will be celebrated at 10:30 a.m., Tuesday, March 2, 2021 at St.... View Obituary & Service Information

The family of Nancy Kerwin created this Life Tributes page to make it easy to share your memories.

Send flowers to the Kerwin family.