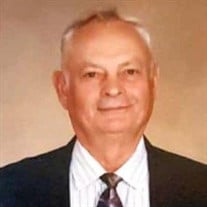 Morris Mathias Kuker, 86 of Auburn, Nebraska, died Tuesday, November 24, 2020 at Good Samaritan Society in Auburn. Mass of the Christian Burial will be celebrated at 11 a.m., Tuesday, December 1, 2020 at St. John Paul II Parish – Holy Spirit Church in Carroll. The Celebrant will be Fr. Kevin Richter. Music will be by Jane Heithoff. Lector will be Erika Kuker Brodersen. Casket Bearers will be William Kuker, Khristopher Kuker, Jake Kuker, Matt Kuker, DJ Kuker. Burial will be in Mt. Olivet Cemetery in Carroll with Military Honors conducted by the Carroll American Legion. A public viewing without greeting the family will be from 10:15 – 10:45 a.m. on Tuesday at Holy Spirit Church. Those attending the Funeral Mass are required to abide by current social distancing guidelines and face coverings are required. Funeral arrangements are under the guidance of the Sharp Funeral Home in Carroll and online condolences may be left for Morris’ family at www.sharpfuneral.com. Morris Mathias Kuker was born on April 7, 1934, in Carroll, Iowa, to Mathias and Eleanor (Hoesing) Kuker. Morris grew up in Carroll and graduated from Carroll High School in 1952. He enlisted in the Army and eventually moved to Schleswig, Iowa where he continued to farm and start his family. Morris enjoyed farming in his early years in the Carroll and Crawford County areas and later moved to Auburn, NE. He enjoyed spending time reading the Bible and listening to Christian music. Morris loved telling stories of the good ol’ days to all who would listen, cracking jokes and visiting with others. Morris is survived by his children: William (Dawn) Kuker of Vienna, VA, Melissa Moorhead of Pleasant Hill, IA, Jennifer (Nathan) Tafoya of Las Vegas, NV, and Khristopher (Jamie) Kuker of Rockwall, TX; three grandchildren Brayden Kuker, Matthias Kuker and Hannah Kuker; his brother Robert Kuker; sisters, Lavonne (Leon) Wernimont, Jolene Happe, Rilla (Lloyd) Soetmilk and Jacque Rattenborg, and sister-in-law Margaret Kuker as well as many nieces, nephews, and other extended relatives. He was preceded in death by his parents, Mathias and Eleanor Kuker; his sister Lois Graham; and his brothers, Thomas, Evan, Ronald, Richard, Marvin, and Allan.

The family of Morris Kuker created this Life Tributes page to make it easy to share your memories.