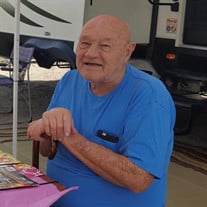 Milo Hermsen, age 85, of Bullhead City, Arizona and formerly of Maple River and Omaha, died Monday, December 14, 2020 at his home in Bullhead City, Arizona. Mass of the Christian Burial will be celebrated at 10:30 a.m. Wednesday, December 30, 2020 at Holy Spirit Church- St. John Paul II Parish in Carroll. The celebrant will be Fr. Kevin Richter. Instrumental Music will be by Jane Heithoff. Casket Bearers will be Milo’s family. Burial will be at St. Francis Cemetery in Maple River with military honors conducted by the Carroll American Legion. Visitation with the family will be held from 5-7 p.m. on Tuesday at the Sharp Funeral Home in Carroll. Visitation without greeting the family will be held from 9:30a-10:a.m. Wednesday at the church. Those in attendance of the visitation and of the funeral mass are required to wear a mask and abide by all Social Distancing Guidelines. In lieu of flowers memorials may be directed to the family. Those wishing to mail a memorial may direct it to the Milo Hermsen Family C/O Sharp Funeral Home 226 W. 8th Street. Carroll, Iowa 51401. Funeral arrangements are under the guidance of the Sharp Funeral Home in Carroll, and online condolences may be left for Milo’s family at www.sharpfuneral.com. Born on December 20, 1934 in Woodbine, Iowa, Milo was the son of Julius and Anna (Loew) Hermsen. He grew up in the Carroll community and graduated from Carroll High School. On August 21, 1958, Milo was united in marriage to Audrey Snyder at St. Peters Catholic Church in Omaha. After their marriage, the couple lived in Idaho for a short time while he was stationed in the Air Force. They moved to Maple River, Iowa for 3 years and in 1963 returned to Omaha. In 1986, they retired to Las Vegas, Nevada, and in 1998 relocated to Ft. Mojave, Arizona until his passing. Throughout the years, Milo enjoyed playing cards, softball, bowling, working with his hands, and going to therapy (Poker room at the casino) and spending time with his family, friends and neighbors. Left to remember Milo are his children, Michael (Sylvia) Hermsen of Las Vegas, NV, Nick (Debbie) Hermsen of Omaha, NE, Lori Guevara of Hope Mills, NC, and Jane (Kevin) Brown of Union, NE, his grandchildren, Monica (Joe) Kloesel, Naomi Hermsen, Rebecca Hermsen, Tabitha (Brian) Watson, Emily Guevara, Derek Brown, Alyssa Brown and Ben Brown; and 5 great grand-children. Also surviving are many nieces/nephews and other extended relatives. Milo was preceded in death by his wife Audrey, son Frank Hermsen; three grandchildren: Erika Guevara, Matthew Hermsen, and Jacob Hermsen; three sisters and one brother.

The family of Milo Hermsen created this Life Tributes page to make it easy to share your memories.

Send flowers to the Hermsen family.