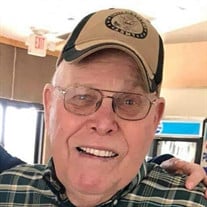 A recording of Merlyn's funeral mass is available at this link: https://youtu.be/wBCRRKjb1rg Early Thursday morning, January 14, 2021, Merlyn “Zubie” Zubrod of Templeton, passed away peacefully in his sleep at Manning Senior Living, following a courageous battle with COPD. Mass of the Christian Burial will be celebrated at 10:30 a.m. Wednesday, Jan. 20, 2021, at Sacred Heart Catholic Church in Templeton. The Celebrant will be Father Timothy Pick. Music will be provided by the Sacred Heart Church Organist. Lector will be Sara Schuler. Honorary Gift bearers will be Kelsey Sikkema, Grace Schuler and Mason Sikkema. Casket Bearers will be Cody Wolf, Kyler Wolf, Scott Feldmann, Larry Heithoff, Ron Langel and Joea Kemper. Honorary Casket Bearers will be Keith Kerkhoff, Kevin Boersma, Rick Gute, Dale Prebeck and Eugene Prebeck. Burial will be at the Sacred Heart Cemetery in Templeton, Iowa, with military honors conducted by the Manning V.F.W., and the Dedham American Legion. Visitation without the family present will be held from 9:30 to 10 a.m. Wednesday at the church. Those in attendance are required to wear a face mask and abide by all COVID-19 restrictions. Those wishing to mail a memorial may direct it to the Merlyn Zubrod Family, C/O Sharp Funeral Home, 226 W. 8th St., Carroll, IA 51401 Funeral arrangements are under the guidance of Sharp Funeral Home in Carroll and online condolences may be left for Merlyn’s family at www.sharpfuneral.com. He was born on April 17, 1929 to Louis & Louise (Bellinghausen) Zubrod on their family farm near Templeton. The family moved to area farms near Halbur, Manning and Templeton, where he attended and completed Grade School and helped on the family farm, along with his five siblings. His parents laid the foundation for his strong Catholic faith, which he carried throughout his lifetime. Merlyn prayed his rosary daily. Merlyn married Marilyn Wanninger on Feb. 5, 1951 at St. Patrick’s Catholic Church in Audubon. He was drafted into the U.S. Army in June 1951, and Army Corporal Zubrod was stationed in Fairbanks, Alaska for two years during the Korean War, prior to the Statehood of Alaska. He often talked about his military buddies and driving his M7 tank. To this union, Randy, Rhonda and James were born. After arriving back to Iowa, Merlyn worked as a finish carpenter and cabinet maker for Lawrence Ocken Construction in Templeton. He eventually turned to farming full-time and made wood-working his hobby. Following Marilyn’s death in 1964, Merlyn married Pat Murphy in Des Moines on August 26, 1969. Pat and her three children, Deb, Karla and Tom moved to the Zubrod farm south of Templeton. In December 1969, Merlyn and Pat purchased their current farm west of Templeton, and welcomed their daughter Tricia in 1970. He continued to farm and raise feeder pigs until his retirement years. Merlyn challenged his wood-working skills by building two wooden drivable cars, and a wooden drivable stagecoach, which he proudly displayed at car shows and parades. During his 80’s, he took on the task of building his own cherry wood casket. What a God-given talent Merlyn was gifted with! He offered his skills to help with the reassembly of the Manning Hausbarn, spending hours tinkering, creating many unique contraptions and enjoyed caring for his horses, donkeys, ostriches, cats and dogs, especially his lab, Cody. With the talk of Templeton Rye being bottled in his hometown, Merlyn jumped on board as a charter employee, known as “The Boss”, where he gave many a good laugh and shared several old time stories. He was an active longtime member of the Templeton Knights of Columbus and the Manning VFW Post# 3517. Merlyn dearly loved his family and going to many of the grandchildren’s activities. He was known for his story-telling, being the town Santa Claus and sharing in many a laugh with friends at the Corner Station in Templeton. No one was a stranger to Merlyn! One of the highlights towards the end of his life was getting to participate in the Brushy Creek Honor Flight to Washington, D.C., accompanied by his youngest daughter Tricia Zubrod. Merlyn is survived by his wife, Pat, of 51 years, son Randy (Karen) Zubrod of Templeton and daughters Rhonda (Bud) Wolf of Omaha and Tricia Zubrod (fiancé Tim Tobin) of Des Moines, along with step-children, Deb (Steve) James, Karla (Chuck) Danner and Tom Allen (Fiancé Annette Cooper), all of Carroll. He is also survived by 10 grandchildren: Sara, Kelsey, Cody, Kyler, Jenni, Matt, Adam, Patrick, Marissa, Gregg and 17 great-grandchildren. He’s also survived by his siblings, Don Zubrod of Manning, Ken (Donna) Zubrod and Carol Mae Rupiper both of Phoenix, AZ. Siblings-in-law: Pauline (Duane) Irlmeier of Templeton, Sally (Harry) Reiman of Carroll, Billy (Lue) Wanninger of Manning, Step-Siblings-in-law: Pat (Kevin) Schultz of Carroll, Lois (Pete) Croghan and Mark (Bonnie) Wanninger both of Manning, Nook (Tom) Wuhr of CO, as well as many nieces, nephews, extended relatives, and special friend Jin Wandzel of Minnesota. He was preceded in death by his first wife, Marilyn and their infant son, James. His parents: Louis and Louise Zubrod; Parents-in-law: Bill and Theresa Wanninger, and Bill’s second wife, Teresa Wanninger, and Matt and Harriet Murphy. Sisters: Thelma (Jerry) Fox and Doris (Allen) Feldmann. Sisters-in-law: Joyce Zubrod and Delores (Roy) Lidbeck, Brothers-in-law: Gene Rupiper and Jim (Marcy) Murphy. Niece: Vickie (Chuck) Hester, and step-grandson, Mike Allen.

The family of Merlyn Zubrod created this Life Tributes page to make it easy to share your memories.

A recording of Merlyn&#39;s funeral mass is available at this link:...

Send flowers to the Zubrod family.