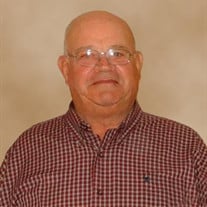 Melvin Borkowski, age 81, of Carroll, died Monday, November 19, 2018, at St. Anthony Regional Hospital in Carroll. Mass of the Christian Burial will be celebrated at 10:30 a.m., Saturday, November 24, 2018 at Our Lady of Mt. Carmel Catholic Church in Mt. Carmel. The Celebrant will be Fr. Gary Snyder. Music will be by Nancy Lemker and Our Lady of Mt. Carmel Choir. Lector for the funeral mass will be Vicki Drees. Gift Bearers will be Dave and Lisa Borkowski. Eucharistic Minister will be Lori Danner. Casket Bearers will be: Mitchell Borkowski, Noah Borkowski, Grant Borkowski, Tim Pudenz, Lynn Wuebker, and Bob Drees. Burial will be in Our Lady of Mt. Carmel Cemetery. Friends may call at the Sharp Funeral Home in Carroll after 5 p.m. on Friday where there will be a Christian Wake Service at 6:30 p.m. Additional visitation will be from 9-9:45 a.m. on Saturday at the Sharp Funeral Home in Carroll. Funeral arrangements are under the direction of the Sharp Funeral Home in Carroll and online condolences may be left for Melvin’s family at www.sharpfuneral.com. Born on July 1, 1937 in Carroll County, Melvin was the son of Clarence Borkowski and Mabel (Vollstedt) Borkowski. He spent his early years near Manning and then moved to Carroll with his mother where he attended Carroll Community Schools. On September 7, 1959, Melvin was united in marriage to Leota Ortner at Our Lady of Mt. Carmel Church in Mt. Carmel. The couple made their home near Carroll where Melvin held various jobs including driving truck for Tiefenthaler Ag-Lime, working as a farm hand for Wilbur Pudenz, and also operated his own farm operation, raising corn and soybeans. In 1989, Melvin and Leota moved to their home north of Carroll. Melvin enjoyed playing cards, touring the countryside, and going to Drees’ regularly for coffee. His greatest joy was his family and he loved being active in all of his grandchildren’s activities. Melvin was a member of Our Lady of Mt. Carmel Church in Mt. Carmel. Melvin is survived by his wife Leota Borkowski of Carroll; his son, Dave Borkowski and his wife Lisa of Lidderdale; his grandsons: Mitchell Borkowski of Tiffin, Noah Borkowski and Grant Borkowski, both of Lidderdale; his sisters: Shirley Lesto of Wells, MN and LaRae Walgenbreach of Nesbit, MS; his sisters-in-law and brother-in-law: Sylvia Onken of Pocahontas, Marilyn Wuebker of Carroll, Jane (Don) Drees of Carroll and Marilyn Ortner of Pittsville, WI; as well as many nieces, nephews, and other extended relatives. Melvin was preceded in death by his parents; and his sisters: Ruby Eagen and Janet Krowiorz.

The family of Melvin Borkowski created this Life Tributes page to make it easy to share your memories.

Send flowers to the Borkowski family.