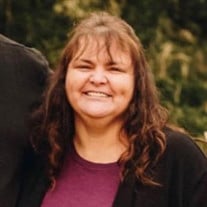 Melissa Ann Enloe, age 49 of Carroll, died on Wednesday, August 11, 2021 at UnityPoint Health – Iowa Methodist Medical Center in Des Moines. A Celebration of Life will be held in the evening of Saturday, August 14 at Graham Park in Carroll. Details regarding the celebration can be found on multiple Family members’ Facebook accounts. Memorial contributions may be directed to Melissa’s family. The Sharp Funeral Home in Carroll is assisting Melissa’s family with arrangements. Born on July 30, 1972 in northwestern Missouri, Melissa was the daughter of Charles and Jeanette (Williams) Hyatt. She grew up and graduated high school in Maysville, Missouri. Following high school, Melissa attended nursing school. On May 28, 1995, Melissa married Steven Enloe in Missouri. For almost a decade they moved to various places depending on where Steve’s job was while he was working construction. They moved to Carroll in 2004. Shortly after that, Melissa and Steve started their own company Anytime Cab. To call Melissa a social butterfly was an understatement. She made friends with everybody and could keep any conversation going. Melissa enjoyed having fires in her fire pit, coloring, her collection of sharpies, and traveling. But her biggest joy in life was her grandchildren. The time she spent with them playing games, joking around, or drawing was priceless. She was a loving wife, mom, grandma, sister, and friend who will be missed by all who knew her. Those left to cherish her memory include her husband Steve of Carroll; her children: Christopher Williamson of Paton, Krystl Enloe of Cameron, Missouri, Justin Williamson of Carroll, and Krysta Enloe of Des Moines; grandchildren: Piper Enloe, Paisley Conroy, Silas Enloe, Preston Williamson, and 2 grandchildren that are on the way; brothers: Danny Hyatt of Plattsburg, Missouri and David Hyatt of Amity, Missouri; other relatives and many friends. She was preceded in death by her parents, grandparents, and one brother.

Melissa Ann Enloe, age 49 of Carroll, died on Wednesday, August 11, 2021 at UnityPoint Health &#8211; Iowa Methodist Medical Center in Des Moines. A Celebration of Life will be held in the evening of Saturday, August 14 at Graham Park in Carroll.... View Obituary & Service Information

The family of Melissa Ann Enloe created this Life Tributes page to make it easy to share your memories.

Send flowers to the Enloe family.