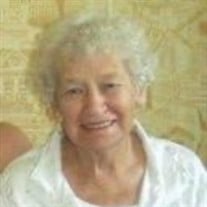 A public graveside service for 91 year old Maxine Haubrich of Carroll will be held on Wednesday, June 17 at 11 AM at Sacred Heart Cemetery in Templeton. Those choosing to attend are asked to abide by COVID-19 social distancing guidelines. A memorial service to celebrate her life will be held on a future date when circumstances allow. Funeral arrangements are under the guidance of Sharp Funeral Home in Carroll and online condolences may be left for Maxine’s family at www.sharpfuneral.com. Memorials can be sent to Maxine Haubrich Family, c/o Sharp Funeral Home, Carroll, IA 51401. Maxine, daughter of Emil and Frances (Skalla) Wurr was born April 24, 1929 on a farm outside of Auburn, Iowa, and was raised near Coon Rapids, Iowa. She was one of six children born to this family. On February 5, 1947 Maxine was united in marriage with Gerald Haubrich at Annunciation Church in Coon Rapids. Three children were born to this union. Maxine and Gerald farmed north of Templeton for 42 years. Maxine raised their children, worked on the farm, did the books for their business Country Welding, and later on, took on employment at several Carroll businesses, including Wal-Mart where she primarily took care of the fitting rooms. Maxine and Gerald moved to Carroll in 1988. She enjoyed doing taxes for people and did so out of her home for many years. Maxine’s faith was a big part of her life; she attended mass regularly, and was a lifelong member of Catholic Daughters of the Americas. She was an avid reader, enjoyed laughing at corny jokes (told us annually that she was tired in April after a March of 31 days), loved daisies, and marveled at the beauty of the night sky. Maxine resided in the Saint Anthony Nursing Home until June 7 when she was moved to the hospital and was scheduled to be placed in hospice. Maxine died there early Thursday morning, June 11, 2020 at the age of 91 years, 1 month, and 18 days of age. Preceding Maxine in death are her husband Gerald, her parents, and her brothers Vincent Wurr and Lawrence Wurr. She is survived by her three children Greg (Char) Haubrich of Rock Valley, IA; Anne Galbraith of La Crosse, WI, and Amy Haubrich of Carroll, IA --- Six grandchildren and 10 great-grandchildren Abby (Garret) Clasen and daughter Grace; Gina (Ryan) Winter and sons Gavin, Bodee, Calen, and daughter Roree; and Jennie (Nathan) Gotto and sons Nash and Niles; Nikki (Riley) Auna and daughter Brynn, son Grant, and daughter Josie; and Alexandra Galbraith; and Jake McCollum (fiancé Paige Rassel) --- Two sisters June (Ambrose) Anthofer of Granger and Luetta Cashatt of Eldora --- One brother Dennis (Sandra) Wurr of Coon Rapids --- And several brothers- and sisters-in-law, nieces, nephews, other relatives, and friends.

A public graveside service for 91 year old Maxine Haubrich of Carroll will be held on Wednesday, June 17 at 11 AM at Sacred Heart Cemetery in Templeton. Those choosing to attend are asked to abide by COVID-19 social distancing guidelines. A... View Obituary & Service Information

The family of Maxine Haubrich created this Life Tributes page to make it easy to share your memories.

A public graveside service for 91 year old Maxine Haubrich of...

Send flowers to the Haubrich family.