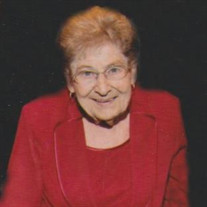 Maxine Busche, age 93, of Carroll, died Sunday, January 19, 2020 at St. Anthony Nursing Home in Carroll. Mass of the Christian Burial will be celebrated at 10 a.m. Saturday, January 25, 2020 at St. John Paul II Parish – Holy Spirit Church in Carroll. The Celebrant will be Fr. Kevin Richter. Music will be by Jane Heithoff and the Holy Spirit Choir. Mass Server will be Tristan Janson. Lector will be Dani Schultes. Gift Bearers will be Heidi Jo Sztanko, Jessica Kennelly, Sara Neil, and Dani Schultes. Eucharistic Minister will be Peg Scheidt. Casket Bearers will be Grant Schultes, Nolan Schultes, Taveon Fairchild, Colton Fairchild, Scott Busche, Maxwell Busche, and Alex Busche. Burial will be at Mt. Olivet Cemetery in Carroll. The St. Anthony Hospital Auxiliary will form an honor guard for the funeral mass. Friends may call at the Sharp Funeral Home in Carroll after 4 p.m. on Friday, where there will be a rosary prayed at 5 p.m., followed by a Christian Wake Service at 7 p.m. The casket will be moved to Holy Spirit Church on Saturday morning where visitation will continue from 9 until 9:45 a.m. In Lieu of flowers memorials may be directed to the Kuemper Catholic School Foundation, or St. John Paul II Parish. Funeral arrangements are under the guidance of the Sharp Funeral Home in Carroll, and online condolences may be left for Maxine’s family at www.sharpfuneral.com. Anna Maxine, the daughter of Bernard and Martha (Hebig) Schenkelberg, was born on January 12, 1927 in Wilmont, Minnesota. She was baptized at St. Killian Catholic Church in Wilmont. At a young age her family moved to Carroll, Iowa. She grew up in Carroll, and graduated from St. Angela’s Academy in 1944. Maxine began working at Northwestern Bell as a telephone operator. On August 2, 1948 she was united marriage to Melvin Busche at Sts. Peter and Paul Catholic Church in Carroll by the Rev. Lambert Schenkelberg. Maxine was a devoted homemaker, while continuing to work for Northwestern Bell until its closing in 1981. After its closing Maxine held various jobs including, The Reader’s Den, Barney’s Deli, and Kuemper School System Food Service. Maxine volunteered for the St. Anthony Auxiliary in her retirement, and received the 2009 Volunteer of the Year Award, she also assisted with Pastoral Care at St. Anthony Hospital. She was a member of Holy Spirit Parish in Carroll, serving on the ladies guild as well as a Eucharistic Minister. Maxine also served on the Kuemper Catholic School Board. Most of all Maxine was very active with the Carroll American Legion Auxiliary holding several offices including Poppy Chairperson until the Carroll Chapter closed. She also volunteered with R.S.V.P., and New Hope Village in Carroll. In her free time she enjoyed needlework, creating many “stitcheries” announcing the birth of each grandchild, as well as Christmas Ornaments each year. She also enjoyed reading, until her eyesight started to fail due to Macular Degeneration, but she still managed to work on many jigsaw puzzles. Maxine will be remember for being a wonderful mother, grandmother, and great-grandmother. Survivors include her 8 children: Martha (Joel) Swigart of Des Moines, Gary (Judi) Busche of Oxford, Becky (Denny) Neubauer of Rockford, IL, Jeff (Shirley) Busche of DeSoto, KS, Bob (Sandy) Busche of Mason City, Ben (Carol) Busche of Highlands Ranch, CO, Melissa (Bill) Schultes of Dedham, Tami (Clif) Fairchild of Ankeny; 20 grandchildren, and 23 great-grandchildren and 1 more on the way; a sister Elizabeth (Bitsy) Schroeder of Urbandale, a brother Mike (Alice) Schenkelberg of Carroll; sisters-in-law, Jane Schenkelberg of Gurnee, IL, Helen Quinn of Carroll, as well as many nieces, nephews, and other extended relatives. Maxine was preceded in death by her parents; her husband, Melvin on June 4, 2003; grandson: Chad Swigart, a great-granddaughter: Hope Kennelly; sisters: Bernice (Howard) Brodt, Janet (Joel) Storry; brothers: Delvin (Mary Rita) Schenkelberg, Robert Schenkelberg; brother-in-law: Clare Schroeder; parents-in-law George and Anna (Skalla) Busche; sisters-in-law, and brothers-in-law. Clara (Mel) Simon, Agnes (George) Neil, Florence (Del) Farrell, George (Elayne) Busche, and Bob Quinn.

The family of Maxine Busche created this Life Tributes page to make it easy to share your memories.

Send flowers to the Busche family.