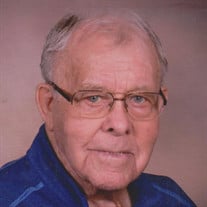 Matthew Neppel, 92 of Carroll, died Tuesday, March 13, 2018 at the Swan Place in Carroll. Mass of the Christian Burial will be celebrated at 10 a.m. Wednesday, March 21, 2018 at St. Lawrence Catholic Church in Carroll. The Celebrant will be Fr. Brian Feller. Music will be by Kate Cuddy and the St. Lawrence Choir. Lectors for the funeral mass will be: Jill Baker and Ann Dean. General Intercessions will be read by: Amy Jones, Katie Goodman, Lindsey Fischer, Tricia Arts, Sara Chereskin, and Kelsey Neppel. Gift Bearers will be: Heather Danzer, Ashely Adam, Kristin Clark, Jennifer Seitter, Courtney Danzer and Danielle Neppel. Eucharistic Minister will be Vicki Dean. Casket Bearers will be: Paul Dean, Tyler Eischeid, Jason Eischeid, Jared Eischeid, Nate Danzer, Jacob Neppel, and Alex Dean. Burial will be at Mt. Olivet Cemetery in Carroll, with military honors conducted by the Carroll American Legion. Friends may call at the Sharp Funeral Home in Carroll after 5 p.m. on Tuesday, where there will be a Christian Wake Service held at 6:30 p.m. The casket will be moved to St. Lawrence Church on Wednesday morning where visitation will resume at 9 a.m., and continue until the time of the funeral mass. Memorials may be left at the funeral home or the church for the American Heart Association or the American Alzheimer’s Association. Funeral arrangements are under the direction of the Sharp Funeral Home in Carroll, and online condolences may be left for Matthew’s family at www.sharpfuneral.com. On October 27, 1925 Matthew John Neppel was born to Max and Rose Neppel in a little farmhouse not far from Willey, Iowa. Matt was five of seven children and would often talk about growing up on the farm and he loved reminiscing and telling stories about his life. At age twenty, Matt was drafted and proud to have served in the United States Army. Matt and the love of his life, Lois Hamers Neppel, were married on September 13, 1947 at St. Peter & Paul Church. Matt and Lois had eight children together Craig (Joanie), Vicki (Ned), Cathy, Becky (Pat), Ron (Karen), Scott (Cathy), Lisa (Marty), and Lori who all contributed to a full head of gray hair and sleepless nights. Matt became an extremely successful oil jobber in 1956 and developed his business which came to be known as Neppel Oil Co. He had an unparalleled work ethic until the day that he retired in 1993. There were many “take your grandchildren to work days” at the station where Matt would put his grandchildren (and adult children) to work and repay them in Pepsi Cola and candy from behind the counter. In retirement, Matt would often be seen golfing, having coffee with his buddies, playing cards at the Moose Lodge, taking trips, and spending time with family. He was immensely proud of his grandchildren and great-grandchildren and spent as much time as he could with them from teaching them to drive in the cornfields, fishing at Swan Lake, beating them at Euchre, and even allowing them to occasionally paint his toenails. Matt was called home and reunited with his Euchre partner after cashing in his quarters of a life well-lived on Tuesday, March 13, 2018 at the Swan Place in Carroll. Every day with Matt was a day to remember and he will be greatly missed. Matt was a member of the Carroll American Legion and St. Lawrence Church in Carroll. Matt is survived by his children: Craig (Joanie) Neppel of Coralville, Vicki (Ned) Dean of Ava Maria, FL, Cathy Neppel of Minneapolis, MN, Becky (Pat) Arts of Omaha, NE, Ron (Karen) Neppel of Olathe, KS, Scott (Cathy) Neppel of Omaha, NE, and Lisa (Marty) Danzer of Carroll; 20 grandchildren and 13 great-grandchildren; his sisters Arlene Dalhoff and Agnes Stoolman, both of Carroll; and his sister-in-law Orsola Neppel of New Jersey; as well as other extended relatives and many friends. Matt is preceded in death by his parents; his loving wife, Lois Neppel; his daughter, Lori Eischeid; and his siblings: Arby Neppel, Ralph Neppel, Melvin Neppel, and Isabelle Feld.

Matthew Neppel, 92 of Carroll, died Tuesday, March 13, 2018 at the Swan Place in Carroll. Mass of the Christian Burial will be celebrated at 10 a.m. Wednesday, March 21, 2018 at St. Lawrence Catholic Church in Carroll. The Celebrant will... View Obituary & Service Information

The family of Matthew Neppel created this Life Tributes page to make it easy to share your memories.

Send flowers to the Neppel family.