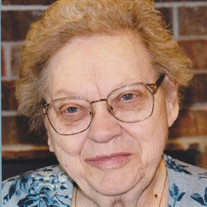 Mary Trecker, age 88, of Carroll, died Monday, December 26, 2016, at the Manning Plaza in Manning. Mass of the Christian Burial will be celebrated at 1:30 p.m. Thursday, December 29, 2016 at St. Lawrence Catholic Church in Carroll. The Celebrant will be Fr. Craig Collison. Music will be by Kate Cuddy and the St. Lawrence Choir with Michele Phillips as cantor. Lector will be Audrey Behrens. Gift Bearers will be Mark Trecker, Marlo Trecker, and Mardell Obermiller. Eucharistic Ministers will be: Diane Hannasch, Jean Knobbe, and Lynette Lehrter. Casket Bearers will be Colton Trecker, William Trecker, Pat Sporrer, Kevin Sporrer, Bill Riesberg and Jeff Trecker. Burial will be at Mt. Olivet Cemetery in Carroll. Friends may call at the Sharp Funeral Home in Carroll after 4 p.m. on Wednesday, where there will be a Rosary prayed at 5 p.m., and a Christian Wake Service will be held at 6:30 p.m. The casket will be moved to St. Lawrence Parish on Thursday, where visitation will resume at 12:30 p.m. and continue until the time of the funeral mass. In lieu of flowers memorials may be directed to St. Lawrence Parish or St. Mary’s Parish in Willey. Funeral arrangements are under the direction of the Sharp Funeral Home in Carroll, and online condolences may be left for Mary’s family at www.sharpfuneral.com. Born on March 28, 1928 at Dedham, Iowa, Mary Ann was the daughter of Joseph and Rose (Sextro) Sporrer. She grew up on the family farm west of Dedham, and graduated from St. Joseph’s school on June 4, 1941. On January 18, 1947 Mary was united in marriage with Merle Trecker at St. Joseph’s Catholic Church in Dedham with Fr. Henry Pick officiating. The couple farmed in Audubon County until 1953 when the couple moved to their farm west of Willey. Mary was a dedicated homemaker, and farm wife. Over the years she raised chickens, gardened, and served as president of the Porkettets. In 1983 the couple moved to a home in Carroll, and in 2007 Mary moved to Sunnybrook of Carroll. Mary enjoyed bowling, quilting, playing cards, fishing in Minnesota, being active with Relay for Life, and spending time with her family. Mary was a member of St. Lawrence Parish, St. Lawrence Ladies Guild, and R.S.V.P. She will be remembered for her determined values, a trait that was demonstrated in beating breast cancer twice. Mary is survived by her children: Mardell Ann (Rodney) Obermiller of Council Bluffs, Mark J. Trecker and friend Neela Martell of Carroll, and Marlo W. (Susan) Trecker of Carroll; her grandchildren: Crystal (Glenn) Archer, Kathleen Snodgrass, Colton Trecker, Amanda Thelen, Ann (Jason) Riesberg, Amanda (Brian) Holle, William Trecker, and Emily Trecker; great-grandchildren: Nichole Cleeton, and Elizabeth Archer; and one great-great-grandchild: Arrabella Cleeton; her siblings: Joe (Mary Kay) Sporrer of Dedham, and Harold (Rita) Sporrer of Manning; and her sister-in-law: Edna Trecker of Des Moines. Mary was preceded in death by her parents, husband Merle in 2006; and her siblings: John Sporrer, Leonard Sporrer, Sally Heithoff, Clarence Sporrer, Alma Forke, Arlene Kasperbauer, and Rose Hacker.

Mary Trecker, age 88, of Carroll, died Monday, December 26, 2016, at the Manning Plaza in Manning. Mass of the Christian Burial will be celebrated at 1:30 p.m. Thursday, December 29, 2016 at St. Lawrence Catholic Church in Carroll. The Celebrant... View Obituary & Service Information

The family of Mary Trecker created this Life Tributes page to make it easy to share your memories.

Send flowers to the Trecker family.