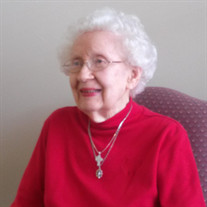 Mary Maureen (Judge) Martin , 98, died on Monday, December 26, 2016, at Swan Place, Carroll, Iowa . Mass of Christian Burial will be celebrated at Holy Spirit Catholic Church in Carroll on Thursday, December 29, at 10:30 a.m. Rev. Timothy Johnson will preside. Interment will take place at Mt. Olivet Cemetery immediately following Mass. Friends may call from 9:00 to 10:00 a.m. on Thursday, December 29 at Holy Spirit Catholic Church in Carroll. The Legion of Mary and Catholic Daughters, with whom Maureen was an active member for over sixty years, will pray the rosary at 10:00. The funeral Mass will immediately follow the visitation and rosary. The first of eight children of John Raymond and Mary Lorena (LaVelle) Judge, Maureen was born on April 12, 1918 on a farm outside of Boone County, Iowa. At the age of fifteen, she moved to Sioux City and attended Cathedral Girls High School. While there, she lived with her grandmother, Anna LaVelle, and her uncle, Reverend Linus LaVelle, the pastor of St. Jean Baptiste Catholic Church, helping them with housework. She was married to Owen D. Martin on June 29, 1940 at St. Jean Baptiste Church by Fr. LaVelle. After making Sioux City their home for fourteen years, Mr. and Mrs. Martin moved to Maple River, Iowa, and later, to Templeton, Iowa. In 1961 they moved to Carroll where Maureen was employed as a switchboard operator at St. Anthony’s Hospital, as a secretary at Holy Spirit Church and later as the secretary for the parish school. She was also employed for a number of years by the transportation division of the Carroll Public School System. A deeply devout woman who attended mass and prayed the rosary daily, Maureen was a devoted and loving wife, mother, sister, grandmother and friend. She particularly delighted in sending warm greetings throughout each year to her family and friends. She further was both a prolific seamstress and a gardener who was especially proud of the rose garden which she and Owen tended. Mrs. Martin was preceded in death by her husband, Owen (November, 2000), three sons: Michael, Timothy and Anthony; four grandchildren, Angela Martin, Tucker Martin, Brad Martin and Monica Seifried; three sisters: Jeanne Thomas, Lucille Briley, Sister Suzanne Judge, BVM; one brother, Gerald; six brothers-in-law: John Sawyer, Charles Lawler, Milton Lager, Peter Carroll, Lyle Thomas, Dean Briley and one sister-in-law, Bernadette Carroll. She is survived by three sons: Daniel (Rosemary) of Jacksonville, Florida, John (Molly) of Ann Arbor, Michigan, and Mark (Catherine) of Blue Springs, Missouri; one daughter, Mary Ann Davis (Hal) of Louisville, Kentucky; and by ten grandchildren and nineteen great-grandchildren. She is also survived by three sisters: Charlotte Sawyer of Boone, Clare Lager of Missouri Valley, Susan Lawler of Ogden, Iowa, and two sisters-in-law, Carmelrose (Joe) Burns of Cheyenne, Wyoming and Annette (Jack) Lethcoe of Sioux City, Iowa. Memorials may be given to Holy Spirit Church in Carroll, Iowa.

The family of Mary Maureen Martin created this Life Tributes page to make it easy to share your memories.

Send flowers to the Martin family.