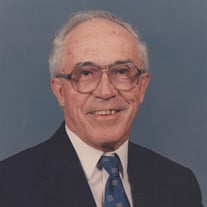 Marvin Snyder, age 92, of Carroll, died Monday, August 07, 2017, at St. Anthony Nursing Home in Carroll. Mass of the Christian Burial will be celebrated at 10 a.m. Friday, August 11, 2017 at St. Lawrence Catholic Church in Carroll. The Celebrant will be Fr. Brian Feller. Mass servers will be great-grandsons: Ben Gerken and Grant Gerken. Music will be by Kate Cuddy and the St. Lawrence Choir. Lector for the funeral mass will be granddaughter, Kim Gerken. Gift Bearers will be granddaughters: Jackie Brown, Angie Blum, and Kelly Kreifels. Eucharistic Minister will be Donna Bachman. Casket Bearers will be grandsons: Scott Snyder, Cory Snyder, Ryan Snyder, Andy Snyder, Clark Snyder, Jeff Snyder, Matt Schneider, and Nathan Schneider. Burial will be in Mt. Olivet Cemetery in Carroll with military honors conducted by the Carroll American Legion. Friends may call at the Sharp Funeral Home in Carroll after 5 p.m. on Thursday where there will be a Christian Wake Service at 6:30 p.m. The casket will be moved to St. Lawrence Church on Friday morning where visitation will resume at 9 a.m. and will continue until time of the funeral mass. Funeral arrangements are under the direction of the Sharp Funeral Home in Carroll and online condolences may be left for Marvin’s family at www.sharpfuneral.com. Born on October 10, 1924 at Maple River, Iowa, Marvin was the son of Matthew and Minnie (Rutten) Snyder. He attended country school and later attended Carroll High School. When Marvin was 17 years old his mother passed away and his step-mother, Ann Feld was instrumental in his life. He served in the United States Army and following his honorable discharge returned to the Carroll area. On April 8, 1947, Marvin was united in marriage to Florence Kennebeck at St. Mary's Catholic Church in Willey. The couple made their home in Carroll where Marvin was employed at Heider Manufacturing and following their closing worked for Scranton Manufacturing. Marvin also worked many years at the Super Car Wash in Carroll. Marvin enjoyed playing cards, video card games, reading, doing puzzles, and was an avid baseball fan. He was a member of St. Lawrence Church and the Carroll American Legion. Marvin is survived by his children: Bill (Jean) Snyder of Carroll, John (Pat) Snyder of Templeton, Bob (Shirley) Snyder of Carroll, and Barb (Randy) Schneider of Greenwood, MO; 12 grandchildren; 26 great-grandchildren; his sisters: Millie Dion of Carroll and Evelyn (John) Wheeler of Indiana; his step-sister, Esther (Glen) Eich of Omaha; his sisters-in-law and brothers-in-law: Ruth Ann Snyder of Carroll, Eugene (Bud) Kennebeck of Carroll, Mary Bernholtz of Carroll, Doris (Bill) Bruggeman of Lidderdale, and Larry (Della) Hinners of Manning; as well as many nieces, nephews, other extended relatives. Marvin was preceded in death by his parents; his wife Florence; his brothers, Leonard Snyder and Rudell Snyder; his step-brothers: Conrad Feld and Charlie Feld.

The family of Marvin Snyder created this Life Tributes page to make it easy to share your memories.