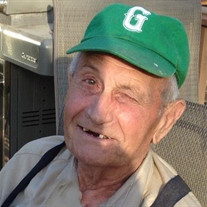 Marvin Kuker, 86 of Carroll, died Tuesday, May 7, 2019 at St. Anthony Regional Hospital in Carroll. Mass of the Christian Burial will be celebrated at 11 a.m., Saturday, May 11, 2019 at St. John Paul II Parish – Holy Spirit Church in Carroll. The Celebrant will be Fr. Kevin Richter. Music will be by Dr. Franklyn Busby, Pastoral Musician and the Holy Spirit Resurrection Choir. Lectors for the funeral mass will be Susan Wernimont and Erika Brodersen. Gift Bearers will be Melissa Moorhead and Ami Foss. Casket Bearers will be: Jake Kuker, Matt Kuker, D.J. Kuker, Lynn Wernimont, Scott Wernimont. Burial will be in Mt. Olivet Cemetery in Carroll. Visitation will be held one hour prior to the funeral mass on Saturday at Holy Spirit Church. Funeral arrangements are under the direction of the Sharp Funeral Home in Carroll and online condolences may be left for Marvin’s family at www.sharpfuneral.com. Born on November 1, 1932 at Carroll, Iowa, Marvin was the 3rd oldest child of Mathias and Eleanor (Hoesing) Kuker. He attended Sts. Peter and Paul School and later Carroll High School. Except while in the United States Army for 2 years, Marvin spent his entire lifetime on the Kuker Family Farm “the Home Place” west of Carroll where he was engaged in grain and livestock farming. Marvin often told the stories while stationed in Germany of singing with a local choir, and a trip to Rome, Italy, along with visiting Lourdes shrine among other activities. Known to his family as Marv, he was a big part of farming and farming was a big part of him. Marvin also had a love for dancing and Polka music. Marvin is survived by his siblings: Morris Kuker of Auburn, NE, Joleen Happe of Burnsville, MN, LaVonne (Leon) Wernimont of Carroll, Allan (Margaret) Kuker of Denison, Rilla (Lloyd) Soetmelk of Berryville, AR, Robert Kuker of Rimrock, AZ and Jacque Rattenborg of Webster City; as well as many nieces, nephews, and other extended relatives. Marvin was preceded in death by his parents; his sister, Lois Graham; his brothers: Thomas, Evan, Ronald and Richard Kuker; his brothers-in-law, Dr. Dwight Graham, Gene Happe, and Darrell Rattenborg; and his nephews: John Kuker, Steven White, and Chad Rattenborg.

The family of Marvin Kuker created this Life Tributes page to make it easy to share your memories.