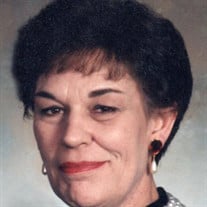 Mass of the Christian Burial for Marnell Fox will be celebrated at 10 a.m. Saturday, March 18, 2017 at Holy Spirit Catholic Church in Carroll. The Celebrant will be Fr. Timothy Johnson. Music will be by Barb McDermott and the Holy Spirit Choir. Gift Bearers will be Marnell’s granddaughters: Morgan Thompson and Taylor Thompson. Casket Bearers will be Aaron Fox, Nathan Fox, Mark Smith, Jim Smith, Robert Fliger, and David Wade. Burial will be in Mt. Olivet Cemetery in Carroll. Friends may call at the Sharp Funeral Home in Carroll from 5 to 7 p.m. on Friday evening. The casket will be moved to Holy Spirit Church Saturday morning where visitation will resume at 9 a.m., and continue until the time of the funeral mass. Funeral arrangements are under the direction of the Sharp Funeral Home in Carroll, and online condolences may be left for Marnell’s family at www.sharpfuneral.com. Marnell Fox was born on March 13, 1942 in New Hampton, Iowa. She graduated from New Hampton High School in 1960 and The University of Iowa with a degree in Business Administration in 1964. She married John J. Fox on Thanksgiving Day, 1964. They remained in New Hampton and eventually began to raise their three children there. In 1980, the family relocated permanently to Carroll, Iowa. Since all three kids were now in school, Marnell returned to work, selling insurance and annuities for several years. She then took on the task of Coordinator for the Wallace Foundation, a non-profit organization that was an extension of Iowa State University. Her goal in this capacity was to raise funds to purchase a working farm for the university’s agricultural research division, which she ultimately was successful in doing. Based on this success, she became the Fund Development Director for the Danish Immigrant Museum (now the Museum of Danish America) in Elk Horn, Iowa. She felt a special connection to this project due to her own Danish ancestry. She retired early in 2004 to spend more time with her husband and grandsons who lived in Carroll. After her husband passed away, she moved to Odessa, Texas in 2006, to spend time with her daughter and two granddaughters who lived there. Here she completed the Master Gardener course and became a volunteer historian and archivist with the Girl Scouts of the Desert Southwest. This led to a full-time position with the organization as its Fund Development Manager. She handled many of its annual functions, such as “Women of Distinction” and its “Annual Cookout” at Camp Mitre Peak. She remained in this position until her death. Throughout her life, Marnell enjoyed traveling, especially to places of historic significance, and spending time with her family. She loved music and the arts and was an accomplished pianist and designer herself. Gardening was always one of her passions, as was spending time with and helping to raise her grandchildren. Marnell died March 11, 2017 at Medical Center Hospital in Odessa, Texas following a brief illness. Marnell was preceded in death by her father, Louis Fliger, Jr., and her mother, Erna Fliger; her husband, John J. Fox; her brothers, Louis Fliger III and James Fliger, her sister, Denise Rowan, and an infant daughter, Mary Fox. Marnell is survived by her daughter, Angela Fox-Thompson of Odessa, Texas, her sons and their wives, Joel and Chicone Fox of Carroll, Iowa and Darin and Sherril Fox of Stuttgart, Germany and seven grandchildren, her sister Mary Lou Erickson of Minneapolis, Minnesota, her sister Alice Jean Bartz of New Hampton, Iowa, her brother, Lynn Fliger of Minneapolis, Minnesota, her brother Robert Fliger of New Orleans, Louisiana, her sister-in-law, Ramona Gates of New Hampton, Iowa, her aunt and uncle, Jeananne and Marland Johnson of Laurel, Montana, several cousins, and numerous nieces and nephews.

Mass of the Christian Burial for Marnell Fox will be celebrated at 10 a.m. Saturday, March 18, 2017 at Holy Spirit Catholic Church in Carroll. The Celebrant will be Fr. Timothy Johnson. Music will be by Barb McDermott and the Holy Spirit Choir.... View Obituary & Service Information

The family of Marnell Fox created this Life Tributes page to make it easy to share your memories.

Mass of the Christian Burial for Marnell Fox will be celebrated...

Send flowers to the Fox family.