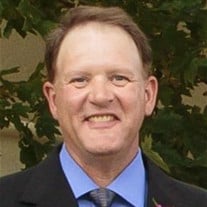 DUE TO THE INCLEMENT WEATHER FUNERAL ARRANGEMENTS FOR MARK ARE POSTPONED. VISITATION WILL BE HELD AT HOLY SPIRIT CHURCH ON MONDAY FROM 11A TO 12:45 P.M. FUNERAL MASS WILL BE HELD AT 1 P.M. BURIAL WILL BE HELD AT 3:30 P.M. AT ST. AUGUSTINE CEMETERY IN HALBUR. Mark Heinrichs, 57, of Reno, Nevada died unexpectedly at his home on Sunday, February 17, 2019. Mass of the Christian Burial will be celebrated at 10 a.m. Monday, February 25, 2019 at St. John Paul II Parish – Holy Spirit Church in Carroll. The Celebrant will be Fr. Kevin Richter. Music will be by Marcy Anderson, with Sherry Loughran as cantor. Mass Servers will be Jake Heinrichs, Cassie Heinrichs, and Annie Burns. Lectors will be Beth Johns and Devan Heinrichs. Gift Bearers will be Rachel Heinrichs and Lori Burns. Eucharistic Minister will be Robyn Hodge. Casket Bearers will be Doug Heinrichs, Kris Heinrichs, Kurt Heinrichs, Jack Burns, John Burns, James Burns, Andy Heinrichs, and Ryan Heinrichs. Burial will be at St. Augustine Cemetery in Halbur. Friends may call at the Sharp Funeral Home in Carroll after 3 p.m. on Sunday where there will be a Christian Wake Service held at 5 p.m. The casket will be moved to Holy Spirit Church on Monday morning, where visitation will continue from 9:00 a.m. until 9:45 a.m. Funeral arrangements are under the direction of the Sharp Funeral Home in Carroll, and online condolences may be left for Mark’s family at www.sharpfuneral.com. Mark was born on the 4th of July, 1961 in Carroll, Iowa. Mark was the son of James and Joleen (Hinners) Heinrichs. He graduated from Kuemper Catholic High School in 1979; where he played on the state golf and basketball teams. Mark continued his education at Gateway Electronics Institute earning a degree in Information Technology. After school he moved to Washington D.C. where he worked 14 years for the Associated Press as a Senior Communication Manager. His career advanced, and in 1999 he began working for the Washington Post where he held multiple management positions in their IT Department. In 2008, wanting a change, new scenery and to get out of the big city, Mark moved to Reno, Nevada. He partnered with his brother Kurt in a landscape and design company called H & H Landscape. He loved being close to family members living nearby and building the business into one of the most premier landscaping companies in the area. Mark could light up the room with his presence and was always known for his bright smile, booming voice, infectious laugh and endless energy. He loved his family more than anything and treasured his annual fishing trips with his mom, dad and brothers every year in Canada. He had an adventurous spirit and loved to travel, experiencing new cultures and people everywhere he went. He had a passion for music, loved playing his electric guitar, and was always the life of the party. Mark was loved by all and made everyone feel special. People loved being surrounded by his vibrant, optimistic personality! Left to celebrate his life is his mother, Joleen Heinrichs of Carroll; his siblings Lori (Jack) Burns of Algona, IA, Doug Heinrichs (Fiancé Jen Dennis) of Reno, NV, Kris (Sara) Heinrichs of Sleepy Eye, MN, Kurt Heinrichs (Fiancé Sheelah Golliglee) of Reno, NV, Beth (Craig) Johns of Reno, NV, and Rachel Heinrichs of Des Moines. He is also survived by many aunts, uncles, nieces, nephews and cousins and a work crew that loved him like family. Mark also had a close relationship with Sophie Rahimi and deeply loved her and her two sons, Ashkaan and Sherwin. Mark was preceded in death by his father, James Heinrichs, his grandparents, Victor and Viola Hinners and Lawrence and Mary Heinrichs, as well as several uncles and his cousins Mitchell Hinners and Jeff Heinrichs.

DUE TO THE INCLEMENT WEATHER FUNERAL ARRANGEMENTS FOR MARK ARE POSTPONED. VISITATION WILL BE HELD AT HOLY SPIRIT CHURCH ON MONDAY FROM 11A TO 12:45 P.M. FUNERAL MASS WILL BE HELD AT 1 P.M. BURIAL WILL BE HELD AT 3:30 P.M. AT ST. AUGUSTINE CEMETERY... View Obituary & Service Information

The family of Mark Heinrichs created this Life Tributes page to make it easy to share your memories.

DUE TO THE INCLEMENT WEATHER FUNERAL ARRANGEMENTS FOR MARK ARE...