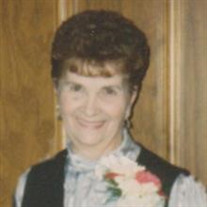 Marjorie Hansen, 94 of Carroll, died Saturday, January 27, 2018 at Regency Park Nursing Home in Carroll. Mass of the Christian Burial will be celebrated at 10:30 a.m. Wednesday, January 31, 2018 at Holy Spirit Catholic Church in Carroll. The Celebrant will be Fr. Kevin Richter. Music will be by Barb McDermott and the Holy Spirit Choir. Lector and Eucharistic Minister will be Marjorie’s daughter, Barbara Kennedy. Gift Bearers will be Marjorie’s children, Linda Byers and Jeffery Hansen. Casket Bearers will be Marjorie’s family. Burial will be in Mt. Olivet Cemetery in Carroll. Visitation will begin at Holy Spirit Church at 9:30 a.m. on Wednesday and will continue until time of the funeral mass. In lieu of flowers memorials may be left at the church for Kuemper Catholic Schools Foundation. Funeral arrangements are under the direction of the Sharp Funeral Home in Carroll and online condolences may be left for Marjorie's family at www.sharpfuneral.com. Born on May 24, 1923 in Omaha, Nebraska, Marjorie was the daughter of Jacob and Kathryn (Janulewicz) Mischo. She spent her younger years in Columbus, Nebraska and later attended school her freshman year in Denver, Colorado. She then attended high school in Redondo Beach, California before graduating from Carroll High School. On June 27, 1946, Marjorie married the love of her life, Vernon Hansen at St. Lawrence Catholic Church in Carroll with Fr. Arthur Poeckes officiating. To this union were three children: Barbara, Linda, and Jeffrey. Marjorie was employed as a secretary in the Bob Dolezal Insurance Agency (Mid-Iowa) for several years and also for the Carroll County Treasurer during tax season. She enjoyed flowers, gardening, writing letters, Iowa State Basketball, and watching tennis on television. Marjorie loved spending time with her family; especially her grandchildren and great-grandchildren. Marjorie is survived by her children: Barbara (David) Kennedy of Myrtle Beach, South Carolina, Linda (David) Byers of Scottsdale, AZ and Jeffrey Hansen of Tempe, AZ; 11 grandchildren; 12 great-grandchildren; and her brother, Daniel (Lee) Mischo of Sacramento, California. Marjorie was preceded in death by her parents; her husband Vernon in 1995; and her brother, Jim Mischo.

The family of Marjorie Hansen created this Life Tributes page to make it easy to share your memories.

Send flowers to the Hansen family.