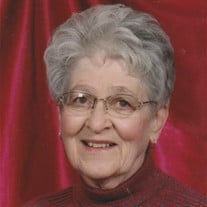 Marilyn Pletchette, 85 of Carroll, died Sunday, February 18, 2018 at St. Anthony Nursing Home in Carroll. Mass of the Christian Burial will be celebrated at 10 a.m. Saturday, February 24, 2018 at Holy Spirit Catholic Church in Carroll. The celebrant will be Fr. Kevin Richter. Con-Celebrant will be Fr. Edmund Tiedeman. Music will be by Barb McDermott, and the Holy Spirit Choir. Mass Servers will be Nathan Heinrichs, Jackson Snyder, and Brooklynn Burmeister. Lectors will be Gracie Tunning, Alyson Schreck, and Jacque Guy. Gift Bearers will be Maxwell Snyder, Roscoe Kavalier, Amelia Heiderscheit, and Naomi Schreck. Eucharistic Ministers will be John and Jean Pletchette. Casket Bearers will be Mike Burmeister, Matt Burmeister, Ben Klocke, Chad Schreck, Chase Schreck, Collin Schreck, Cole Schreck, and Adam Tunning. Burial will be at 1 p.m. at the St. Joseph’s Cemetery in Dedham. The St. Anthony Hospital Auxiliary will form an honor guard for the funeral mass. Friends may call at the Sharp Funeral Home in Carroll after 4 p.m. on Friday. There will be a rosary prayed at 5 p.m., and a Christian Wake Service will be held at 6:30 p.m. The casket will be moved to Holy Spirit Church on Saturday morning where visitation will resume at 9 a.m., and continue until the time of the funeral mass. Funeral arrangements are under the direction of the Sharp Funeral Home in Carroll, and online condolences may be left for Marilyn’s family at www.sharpfuneral.com. Our beautiful mother, Marilyn Catherine Pletchette, was born on October 22, 1932, the ninth of eleven children, to Michael and Cathrine (Zitzlsperger) Schultes. She spent her childhood years on a farm midway between Willey and Dedham. Marilyn attended St. Mary’s elementary school in Willey and graduated from St. Angela Academy, a Catholic high school for girls, in Carroll. In the summer of 1949, at a dance in Arcadia following her junior year, Marilyn met her future husband and the love of her life, Don Pletchette. They were married on April 18, 1953, in St. Mary’s Catholic Church in Willey. Marilyn and Don settled in Dedham where they raised their family of seven ~ five girls and two boys ~ plus myriad dogs, cats, and other critters. Marilyn and Don could often be seen on their front porch watching the birds and squirrels eat from their respective feeders. Marilyn worked part-time for Garst & Thomas of Coon Rapids and full-time for Farmer’s Egg Company of Glidden before her 24 years of employment (most with perfect attendance) with General Electric Company of Carroll. Marilyn was also a long-time member of St. Joseph Parish and of the Ladies Guild in Dedham. In her later years, she moved to Carroll where she attended Holy Spirit Catholic Church and enjoyed friendships and social activities from the surrounding area. She was an avid reader, a fan of old movies, a talented holiday decorator, and one who prayed the Rosary often for her family, her friends, and all those in need. Marilyn put her family first. She was an incredibly loving and supportive wife and mother who derived tremendous joy from her beloved grandchildren. Marilyn is survived by her children ~ Nina (David) Burmeister of Coon Rapids, Catherine (Rob Lampman) of Gilbert, AZ, Lisa (Floyd) Klocke of Dedham, John (Jean) Pletchette of Winterset, Mary (Mark) Schreck of Willey, Amy (Dan) Tunning of Omaha, NE, and Michael Pletchette of Waukee. She is also survived by her 22 grandchildren, 40 great-grandchildren, and three sisters ~ Janet Snyder, Dorothy Bruening, and Loretta Hannasch. Marilyn was preceded in death by her husband in the year 2000, her parents, five sisters and two brothers ~ LaVine Tigges, Alvera Irlbeck, Louise Schultes, Lynette Steinkamp , baby Mary Jo, Leon Schultes, and Artie Schultes.

The family of Marilyn Pletchette created this Life Tributes page to make it easy to share your memories.