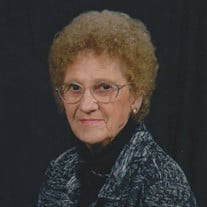 Marian Niceswanger, age 93, of Carroll, died Monday, January 14, 2019 at St. Anthony Nursing Home in Carroll. Mass of the Christian Burial will be celebrated at 10 a.m. Friday, January 18, 2019 at St. John Paul II Parish-Holy Spirit Church in Carroll. The Celebrant will be Fr. Kevin Richter. Con-Celebrant will be Fr. Timothy Johnson. Music will be by Dr. Franklyn Busby, Pastoral Musician and the Holy Spirit Resurrection Choir. Lector for the funeral mass will be Marian’s son, Gary Niceswanger. Gift Bearers will be Marian’s daughter, Debra Davis and Marian’s granddaughters: Melanie Hawk, Jennifer Freed, Hilary Smith, Lacey Nalla, Shelby Niceswanger, Leah Henderson and Erica Uriarte. Eucharistic Ministers will be Carole Freed and Ellyn Van Vulzah. Casket Bearers will be her grandsons: Chris Freed, Jeffrey Freed, Nathan Niceswanger, Justin Niceswanger, Colin Niceswanger, and Shawn Davis. Burial will be in Mt. Olivet Cemetery in Carroll. Friends may call at the Sharp Funeral Home in Carroll after 5 p.m. on Thursday where there will be a Christian Wake Service at 6:30 p.m. The casket will be moved to Holy Spirit Church on Friday morning where additional visitation will be held from 9-9:45 a.m. Funeral arrangements are under the direction of the Sharp Funeral Home in Carroll and online condolences may be left for Marian's family at www.sharpfuneral.com. Born on August 19, 1925 at Breda, Iowa, Marian was the daughter of Joseph and Mary (Reiff) Wempe. She spent her younger years in Breda and attended St. Bernard’s School. On July 28, 1945, Marian was united in marriage to Dennis Niceswanger at St. Augustine Catholic Church in Oakland, California. Following her husband’s honorable discharge from the United States Navy the couple returned to the Carroll area. Marian was a devoted homemaker and also worked as a receptionist for Middendorf Heating and Cooling. In retirement she cleaned with other retired ladies at Holy Spirit Church in Carroll. Marian enjoyed playing cards, fishing, listening to music and ballroom dancing with her husband. She loved cooking and baking for her family and friends. Marian could be described as frugal with a great sense of humor. She was a member of Holy Spirit Church where over the years she served in many capacities. Survivors include her sons: Bruce “Bruno” Niceswanger of Boulder, Colorado, Alan Niceswanger and wife Mabel of Colfax, Ron Niceswanger and wife Lynn of Urbandale, and Gary Niceswanger and his wife Ellyn Van Vulzah of Grayslake, Illinois; her daughters: Carole Freed and husband DWayne of Council Bluffs and Debra Davis and husband Steven of Rock Springs, Wyoming; 13 grandchildren; 13 great-grandchildren; her sister, Marita Buelt of Carroll; her sisters-in-law: Rosemary Niceswanger of Carroll and Lorraine Wempe of Halbur; as well as many nieces, nephews, and other extended relatives. Marian was preceded in death by her parents; her husband Dennis in 2013; her son Gerald Niceswanger; and her brothers: Donald Wempe, Vernon Wempe, and Clarence Wempe.

The family of Marian Niceswanger created this Life Tributes page to make it easy to share your memories.

Send flowers to the Niceswanger family.