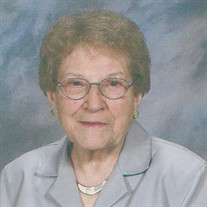 Marian Berning, age 93, of Breda, died Sunday, May 07, 2017, at St. Anthony Regional Hospital in Carroll. Mass of the Christian Burial will be celebrated at 10:30 a.m. Friday, May 12, 2017 at St. Bernard’s Catholic Church in Breda. The celebrant will be Fr. Gary Snyder. Music will be by Marilyn Hundling and the St. Bernard’s Choir. Lector will be Don Masching, Gift Bearers will be Marian’s Great-Grandchildren. Eucharistic Minister will be Judy Mayer. Casket Bearers will be Marty Rath, Terry Rath, Joe Greving, Frankie Greving, Jeff Kjosa, Troy Meyersick, and Pete Zimmerman. Burial will be in the parish cemetery. The St. Anthony Hospital Auxiliary will form an honor guard for the funeral mass. Friends may call at the Sharp Funeral Home in Breda after 4 p.m. on Thursday where there will be a rosary prayed at 5 p.m., and a Christian Wake Service will be held at 6:30 p.m. Visitation will resume at the Sharp Funeral Home in Breda from 9-10 a.m. Friday morning. Memorials may be left at the funeral home or at the church to be directed to St. Bernard’s Church or the St. Anthony Hospital Foundation. Funeral arrangements are under the direction of the Sharp Funeral Home in Breda, and online condolences may be left for Marian’s family at www.sharpfuneral.com. Marian was born on January 28, 1924 at Carroll, Iowa, to Fred and Mayme (Kennebeck) Masching. She went through school at Sts. Peter and Paul and did domestic work before being employed at the Council Oak Grocery Store. On February 5, 1945 Marian was united in marriage to Albert Berning at Sts. Peter and Paul Catholic Church in Carroll by Fr. Schenkelberg. The couple farmed four miles west of Breda, and retired to Breda in 1978. Marian was a member of St. Bernard’s Catholic Church and Ladies Guild, Rosary makers, and quilters groups. She was a 4-H leader, and member of the R.S.V.P. Group, as well as the St. Anthony Hospital Auxiliary. She enjoyed her house plants, quilting, baking crocheting, making rosaries, and playing cards. Marian is survived by her daughter: Janice (Jim) Kjosa of Omaha, NE; grandchildren: Marty Rath (fiancé Vicki Foley) of Auburn, Terry (Melissa) Rath of Auburn, Tammy (Pete) Zimmerman of Spencer, Renee (Troy) Meyersick of Omaha, NE, Jeff (Lourdes) Kjosa of Dallas, TX, Joe (Deana) Greving of Johnston, and Frankie (Michelle) Greving of Carroll, and good friends Linda Rath, Sheri Dirkx, Rosie Wernimont, and Deb Tiefenthaler. Also surviving are 13 great-grandchildren, 2 step-great-grandchildren, and 2 great-great-grandsons; her sisters: Viola Langel, Julie Schmitz, and Helen Stevens all of Carroll; brothers: Alvin (Ruthie) Masching of Colorado Springs, CO, and Marvin (Judy) Masching of Worthington, MN, and many nieces, nephews, and other extended relatives. Marian was preceded in death by her husband Albert in 1998, daughter Patty Greving in 1997, son-in-law: Robert Rath; parents, and parents-in-law: Wm. and Anne Berning; her sister: Irene in infancy, Alice Stitz, brother: Leon (Dorothy) Masching; and brothers-in-law: Joe Stitz, Alver Schmitz, Marvin Stevens, and Simon Langel.

The family of Marian Berning created this Life Tributes page to make it easy to share your memories.