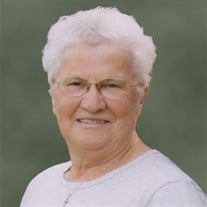 Margaret E. Schroeder, 87 of Arcadia, died Wednesday, January 24, 2018 at St. Anthony Regional Hospital in Carroll. Mass of the Christian Burial will be 10:30 a.m. Monday, January 29, 2018 at St. John’s Catholic Church in Arcadia. The Celebrant will be Fr. Mark Stoll. Con-Celebrant will be Fr. Richard Remmes. Music will be by Sharon Bierl and the St. John’s Choir. Lector will be Nicole Liechti. Gift Bearers will be Margaret’s daughters, Tamie Davey and Julie Liechti. Casket Bearers will be: Lance Meaike, Clint Petersen, Randy Timmerman, Bryan Timmerman, Steve Niehaus, and Jim Niehaus. Burial will be at a later date in St. John’s Cemetery in Arcadia. Friends may call at the Sharp Funeral Home in Carroll after 3 p.m. on Sunday where there will be a Christian Wake Service at 5 p.m. Additional visitation will be from 9-10 a.m. on Monday at the Sharp Funeral Home in Carroll. Funeral arrangements are under the direction of the Sharp Funeral Home in Carroll and online condolences may be left for Margaret’s family at www.sharpfuneral.com. Born on January 12, 1931 in Audubon, Iowa, Margaret was the daughter of Joseph Sr. and Mary (Obermeier) Wanninger. She spent her younger years in the Audubon area where she attended school and assisted her family with their farm operation. On April 19, 1960, Margaret was united in marriage to Stanley B. Schroeder at St. Patrick’s Catholic Church in Audubon. The couple made their home on a farm near Arcadia where she was a devoted homemaker and mother and was the best farmhand Stanley had. Margaret was a member of St. John’s Parish in Arcadia and the St. John’s Christian Mothers. Margaret is survived by her husband, Stanley Schroeder of Arcadia; two daughters, Tamie (John) Davey of Dakota Dunes, SD and Julie (Gene) Liechti of Arcadia; two grandchildren, Samuel Davey and Nicole Liechti; her sister, Rose Timmerman of Jefferson; her brother-in-law, Larry Cavanaugh of Ft. Madison; as well as several nieces, nephews, other extended relatives. Margaret was preceded in death by her parents; her son, Danny Schroeder; her grandson, Daniel Davey; her brother, Joseph Wanninger Jr.; and her sisters, Loretta Wanninger, Eleanor Meaike, and Maxine Cavanaugh.

The family of Margaret Schroeder created this Life Tributes page to make it easy to share your memories.

Send flowers to the Schroeder family.