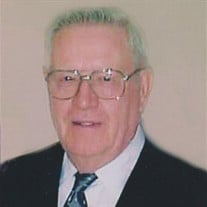 Lynn Hoffman, 86 of Roselle, died Saturday, May 13, 2017 at St. Anthony Regional Hospital in Carroll. Mass of the Christian Burial will be celebrated at 10:30 a.m. Wednesday, May 17, 2017 at Holy Angels Catholic Church in Roselle. The Celebrant will be Fr. Steve Brodersen. Music will be by Marcy Anderson and the Holy Angel’s Choir. Lector for the funeral mass will be Patricia Oleson. Gift Bearers will be: Jessi Wittrock, Nikki Klocke, Stephanie Sloth, and Abby Hoffman. Eucharistic Ministers will be: Amy Sturm, Lou Pottebaum, and Alice Rupiper. Casket Bearers will be: Chad Hoffman, Erik Hoffman, Justin Wittrock, Christopher Potthoff, Adam Potthoff, Alex Hoffman and Sam Sturm. Burial will be in Holy Angel’s Cemetery with military honors conducted by the Carroll American Legion. Friends may call at the Sharp Funeral Home in Carroll after 5 p.m. on Tuesday where there will be a Christian Wake Service at 7 p.m. Additional visitation will be held at the Sharp Funeral Home on Wednesday morning from 9-10 a.m. Memorials may be left at the funeral home or the church for the American Red Cross. Funeral arrangements are under the direction of the Sharp Funeral Home in Carroll and online condolences may be left for Lynn’s family at www.sharpfuneral.com. Born on November 8, 1930 at Carroll, Iowa, Lynn was the son of Francis Xavier “X.F.” and Mathilda (Kennebeck) Hoffman. He attended Holy Angels School in Roselle. Lynn served in the United States Army from 1952 until 1954 where he was stationed in Germany. Following his honorable discharge he returned to the Carroll area and was united in marriage to Elaine Schwabe on April 19, 1955 at St. Francis Church in Maple River. Following their marriage Lynn and Elaine made their home in Roselle. Lynn was employed his entire working career for Bliss Tire Service in Carroll; known today as Bauer Built Tire Service. He enjoyed camping with his wife Elaine, woodworking, reading, studying history, and taking drives across the countryside. Lynn was a member of the Carroll American Legion and also a member of Holy Angels Church in Roselle, where for many years he served as the sexton to the cemetery. Lynn is survived by his children: Gary (Marla) Hoffman of Schaller, Jean (Joel) Wittrock of Halbur, Gail (John) Potthoff of Halbur, Keith (Pam) Hoffman of Clive, and Amy (Russ) Sturm of Avoca; 11 grandchildren; 12 great-grandchildren; one sister, Lou (Art) Pottebaum of Carroll; his sisters-in-law and brothers-in-law: Marian Bellcock of Sac City, Marita (Bernard) Meiners of Coon Rapids, Dorothy (Maurice) Eickman of Templeton, Delores Nagl of Carroll, Ella Mae (Dale) Bueltel of Manilla, Betty Monson of Missouri, and Janice (Bill) Hastings of Jacksonville, Oregon; as well as many nieces, nephews, other extended relatives and many friends. Lynn was preceded in death by his parents; his wife Elaine in April of 2009; his granddaughter, Jennifer Wittrock; his brother, Eugene Hoffman; and his sisters: Melvina Wuebker and Emaline Halbur.

Lynn Hoffman, 86 of Roselle, died Saturday, May 13, 2017 at St. Anthony Regional Hospital in Carroll. Mass of the Christian Burial will be celebrated at 10:30 a.m. Wednesday, May 17, 2017 at Holy Angels Catholic Church in Roselle. The Celebrant... View Obituary & Service Information

The family of Lynn Hoffman created this Life Tributes page to make it easy to share your memories.