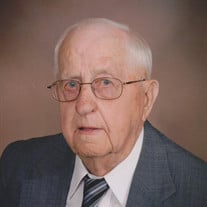 Louis Williams, age 95, of Carroll died Sunday, December 1, 2019 at Regency Park Nursing Home in Carroll. Mass of the Christian Burial will be celebrated at 10:30 a.m. Thursday, December 5, 2019 at St. John Paul II Parish - St. Lawrence Church in Carroll. The Celebrant will be Fr. Shinoj Jose. Music will be by Kate Cuddy and the St. Lawrence Choir. Lectors will be Ashley Betts, Amanda DeWall, and Nicole Williams. Gift Bearers will be Alyssa Fruchtenicht, and Brittny Oetken. Eucharistic Minister will be Louis Smith. Casket Bearers will be Keith Weber, Eric Weber, Bryan Weber, Shawn Williams, Ryan Williams, Tyler Williams, and Jon Fields. Burial will be at Mt. Olivet Cemetery in Carroll. Friends may call after 4 p.m. on Wednesday at the Sharp Funeral Home in Carroll. There will be a rosary prayed at 5 p.m. and a Christian Wake Service will be held at 6:30 p.m. The casket will be moved to St. Lawrence Church on Thursday morning where visitation will resume from 9:30 to 10:15 a.m. Funeral arrangements are under the guidance of the Sharp Funeral Home in Carroll, and online condolences may be left for Louis’ family at www.sharpfuneral.com. Louis, the son of Anton and Ida (Zubrod) Williams was born on June 18, 1924 near Halbur, Iowa. He grew up near Halbur, and attended St. Augustine School. After his education he assisted on the family farm. In 1946 Louis was inducted into the United States Army, and proudly served his country. Upon his honorable discharge he returned home. On September 10, 1952 he was united in marriage to Betty Reis at St. Lawrence Catholic Church in Carroll. The couple made their home in Carroll where Louis was employed as a carpenter his entire working career. Louis enjoyed woodworking, and making a roll-top desk for all of his children and grandchildren. He also enjoyed camping, square dancing, golfing, attending his grandchildren’s events, and baseball, especially when his grandchildren were playing, as well as the Minnesota Twins. Louis was a member of St. Lawrence Catholic Church in Carroll. Left to celebrate Louis’ life are his children: Linda (Jim) Weber of Carroll, Scott (Rose) Williams of Sioux City, Randy (Sandy) Williams of Carroll, and Sandy (Terry) Kluver of Carroll; 12 grandchildren, 18 great-grandchildren; his sisters-in-law: Bernice Williams of Carroll, Esther Williams of Manning, Velma Williams of Halbur, and Anita Williams of Minnesota; as well as many nieces, nephews, and other extended relatives. Louis was preceded in death by his parents; his wife Betty in 1999; and his siblings: Rita (Edward) Meier, Cyril (Helen) Williams, Martha (Walter) Riesberg, Catherine (Albert) Irlmeier, Virgil Williams, Leo Williams, Tony Williams, Raymond Williams, and Ida (Ralph) Hoffmann.

The family of Louis Williams created this Life Tributes page to make it easy to share your memories.

Send flowers to the Williams family.