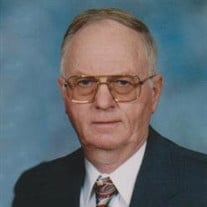 Louis Dean Mueggenberg, age 83, of Carroll, Iowa passed away on Saturday, December 15, 2018, at St. Anthony Nursing Home in Carroll. Mass of the Christian Burial will be celebrated at 10:30 a.m. Friday, December 21, 2018 at St. John Paul II Parish - Holy Spirit Church in Carroll. The Celebrant will be Fr. Kevin Richter. Music will be by Dr. Franklyn Busby, Pastoral Musician, and the Holy Spirit Resurrection Choir. Lector will be Sandy Gallagher Williams. Gift Bearers will be Louis’ grandchildren. Casket Bearers will be Mark Leiker, Jim Craig, Chad Maulsby, Ron Maulsby and Louis’ grandsons. Burial will be at 1 p.m. at St. Bernard’s Cemetery in Breda. Friends may call at the Sharp Funeral Home in Carroll after 5 p.m. on Thursday, where there will be a Christian Wake Service, followed by a Rosary at 7 p.m. The casket will be moved to Holy Spirit Church on Friday morning where visitation will continue from 9:30 to 10:15 a.m. Memorials may be left at the funeral home or at the church to be directed to the St. Anthony Foundation, or Holy Spirit Church. Funeral arrangements are under the direction of the Sharp Funeral Home in Carroll, and online condolences may be left for Louis’ family at www.sharpfuneral.com. Born September 16, 1935, in Carroll, Iowa. Louis was the son of Joseph and Margaret (Irlbeck) Mueggenberg. He grew up in Breda where he helped with the family farming and with the livestock trucking business. Louis moved to Omaha where he attended the Universal Trade School for HVAC. He was a member of the Steamfitters & Plumbers LU #464 and worked for various commercial businesses until his retirement in 1996. While working in Omaha, Louis remained active in acquiring and maintaining his farms in Crawford and Carroll Counties. Louis was married to Ella (Leiker) on February 21, 1970; their marriage was blessed at Mary Our Queen Parish in Omaha, Nebraska where they raised their two children. In 2001, Louis and Ella retired to Carroll where Louis enjoyed working on his equipment, tractor rides, and coffee with his friends. Louis took special interest in conservation practices (waterways, terraces, no till farming) on his farms. Louis is survived by his wife, Ella of Carroll; their two children, Dean (Pamela) of Omaha; Lynn (Jim) Craig of New Braunfels, TX.; and children from previous marriage: Carol, Diane, Jim, John, Kathleen and 15 grandchildren; his siblings Ione Hinners, Denison; Shirley Gallagher, Vail; Marge (Ray) Rosener, Rodney; John (Leona), Breda; brother-in-law, Lee Brincks, Carroll. Louis was preceded in death by his parents; father and mother-in-law, Henry and Regina Leiker; brothers, Vernon and Joseph Jr. Mueggenberg; sister, Darlene Brincks; brothers-in-law, Bob Hinners and Gene Gallagher; daughter-in-law, Libby Mueggenberg; infant brother, Arthur, and two infant sisters, Margaret and Margie.

The family of Louis Mueggenberg created this Life Tributes page to make it easy to share your memories.

Send flowers to the Mueggenberg family.