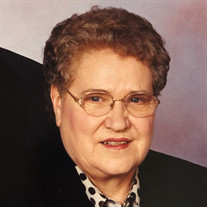 Louetta Langel, 81 of Templeton, died Sunday, November 17, 2019 at the Friendship Home in Audubon, Iowa. Mass of the Christian Burial will be celebrated at 10 a.m., Saturday, November 23, 2019 at Sacred Heart Catholic Church in Templeton. The Celebrant will be Fr. Timothy Pick. Mass Servers will be Dylan Wieland and Jake Wieland. Music will be by Jeanne Kerkhoff, Sacred Heart Men’s Choir, and Carolyn Miller as soloist. Lector for the funeral mass will be Lorraine Hoffman. Gift Bearers will be Louetta’s great-grandchildren. Eucharistic Ministers will be Adella Vogl and Imelda Langel. Casket Bearers will be: Michael Langel, Megan Langel, Matthew Langel, Scott Stevens, Will Stevens, Alex Langel, and Seth Langel. Burial will be in the parish cemetery. Friends may call at the Sharp Funeral Home in Carroll after 4 p.m. on Friday where there will be a rosary at 5 p.m. by the Carroll Catholic Daughters of the Americas and a Christian Wake Service at 6:30 p.m. The casket will be moved to Sacred Heart Church in Templeton on Saturday morning where additional visitation will be held from 9-9:45 a.m. Funeral arrangements are under the guidance of the Sharp Funeral Home in Carroll and online condolences may be left for the Langel family at www.sharpfuneral.com. Louetta Langel was born March 9, 1938 in Roselle, Iowa, the daughter of Andrew and Laura (Riesberg) Hoffman. She had one older brother, and five younger sisters. She grew up on a farm near Roselle, Iowa. Louetta attended Holy Angels School in Roselle. After her aunt Bonnie had a baby, Louetta stayed with her to help out. While she was there, she met a young man named LaVern who was helping his uncle Ted Langel. The continued to see each other at dances. Louetta worked for Hinky Dinky in Carroll, and roomed with another girl. She married LaVern Langel on April 23, 1957. LaVern went in to the Army. She followed him to Georgia and Texas until he was deployed to Germany. Louetta moved in with her parents when Rick was born until LaVern returned home. They lived and worked in Carroll. During that time, Jim and Joni were born. In 1966 they moved to LaVern’s family farm. They had another son, Dave. They raised corn, beans, hogs, Miniature Schnauzers and kids. Louetta always had a large garden and enjoyed plating flowers on the farm. She also had a variety of house plants. As the kids grew up and moved out, Louetta started to work at Fareway in Carroll until the store moved to the east side of Carroll. During retirement, she went to coffee with friends a couple of days a week, played bingo, played cards, and enjoyed going to the casino. She enjoyed spending time with her family. Louetta collected dolls and depression era dishes and glassware. She like antiques and craft show treasures to display around the house. In 2013 Louetta became a resident of the Carroll Health Center, then in 2016 Louetta became a resident of the Friendship Home in Audubon. Louetta was a member of the Catholic Daughters of the Americas, Sacred Heart Ladies Guild, and volunteered in the library at Sacred Heart School. She and LaVern always volunteered in the community and set an example for their children, six grandsons, and one granddaughter. Louetta is survived by her husband LaVern Langel of Templeton; her children: Rick (Ann) Langel of West Bend, Jim Langel of Newell, Joni Langel of Urbandale, and Dave (Allison) Langel of Coon Rapids; 7 grandchildren; 11 great-grandchildren; her siblings: Edward (Lorraine) Hoffman of Lidderdale, Adella (John) Vogl of Adair, Alvera (Virgil) Rosonke of Manning, Laura Ann (Denny) Danner of Carroll, and Rosie Sturm of Carroll; her sisters-in-law and brothers-in-law: Yvonne Broich of Carroll, Bernita (Clayton) Broich of Carroll, Don (Vera) Schettler of Omaha, and Elmer (Imelda) Langel of Manning; as well as many nieces, nephews, and other extended relatives. Louetta was preceded in death by her parents; a childhood sister, Velma Hoffman, parents-in-law, Joseph and Mary Langel; her sister-in-law, Edna Schettler; her brother-in-law, Tom Broich; and her great-granddaughter, Ava Stevens.

The family of Louetta Langel created this Life Tributes page to make it easy to share your memories.