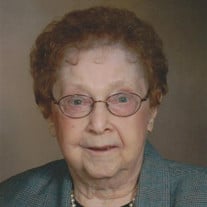 Lorraine “Rainy” Wieland, age 81, of Carroll, died Sunday, May 28, 2017, at St. Anthony Regional Hospital in Carroll. Mass of the Christian Burial will be celebrated at 10 a.m. Thursday, June 1, 2017 at St. Lawrence Catholic Church in Carroll. The celebrant will be Fr. Craig Collison assisted by Deacon Gary Schon. Fr. Timothy Schott will con-celebrate the funeral mass. Music will be by Kate Cuddy and the St. Lawrence Choir with Sherry Loughran as Cantor. Mass Servers will be Jacob Snyder and Josh Sapp. Lectors will be Samantha Schmitz, Katie Wieland, and Alicia Snyder. Gift Bearers will be Lorraine’s grandchildren. Casket Bearers will be William Wieland, Daniel Wieland, Ronald Wieland, Timothy Wieland, James Wieland, and Charles Wieland. Burial will be at Mt. Olivet Cemetery in Carroll. Friends may call at the Sharp Funeral Home in Carroll after 4 p.m. on Wednesday where there will be a Rosary prayed at 6 p.m. The casket will be moved to St. Lawrence Church on Thursday morning where visitation will resume at 9 a.m., and continue until the time of the funeral mass. Funeral arrangements are under the direction of the Sharp Funeral Home in Carroll, and online condolences may be left for Lorraine’s family at www.sharpfuneral.com. Born on September 5, 1935 at Carroll, Iowa, Lorraine was the daughter of Clarence and Catherine (Gehling) Masching. She grew up near Carroll, and graduated from St. Angela’s Academy in 1953. On January 11, 1954, Lorraine was united in marriage to Paul Wieland at Sts. Peter and Paul Catholic Church in Carroll. The couple made their home in the Carroll community where Lorraine was a devoted homemaker raising their nine children. In addition to being a homemaker Lorraine also worked various jobs in Carroll. Lorraine enjoyed working with children, trips to the casino, and being a member of her card club for over fifty years. Most of all Lorraine enjoyed the time she spent with her husband, children, grandchildren, and great-grandchildren. She will be remembered as a great friend, and a great lady. Left to celebrate Lorraine’s life is her husband of 63 years, Paul Wieland of Carroll; their nine children: Bill (Lisa) Wieland of Johnston, Daniel “Boone” Wieland of Cedar Rapids, Ron (Carolyn) Wieland of Crete, NE, Becky (Dave) Snyder of Carroll, Connie (Mike) Sapp of Carroll, Tim (Lori) Wieland of Des Moines, Mary (Al) Schmitz of Halbur, Jim (Kathy) Wieland of Ames, and Charlie Wieland of Richardson, TX; 24 grandchildren, 21 great-grandchildren. Also surviving are her siblings: Evie (Donald) Wieland of Carroll, Edna Ludwig of Carroll, Lois (Chuck) Neumayer of Carroll, Don (Barb) Masching of Breda, and Jim (Joyce) Masching of Carroll; her brothers-in-law: Leo Schon of Carroll, Jim (Mary Ann) Pudenz of Carroll; her sisters-in-law: Betty Masching of Carroll, and Beatrice (Richard) Pudenz of Carroll; as well as many nieces, nephews, and other extended family members. Lorraine was preceded in death by her parents; a great-great-granddaughter Eva in infancy; her siblings: Rosemary Schon, Mary Pudenz, Louis (Eunice) Masching, Edwin (Norma) Masching; and two siblings in infancy: Leona Masching, and Robert Masching; her brother-in-law: Orville Ludwig her sisters-in-law: Maxine (Leon) Schultes, Sister Marian Wieland, F.S.P.A., and Dolores (LaVern) Pudenz.

The family of Lorraine "Rainy" Wieland created this Life Tributes page to make it easy to share your memories.