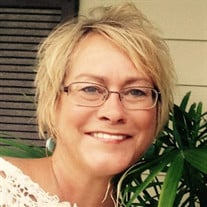 Lori Handlos, age 51, of Carroll died unexpectedly on Saturday, May 6, 2017. Mass of the Christian Burial will be celebrated at 10:30 a.m. on Wednesday, May 10, 2017 at St. Augustine Catholic Church in Halbur. The Celebrant will be Fr. Steve Brodersen. Mass Servers will be Kyler Eischeid, and Mitchell Leonard. Music will be by the St. Augustine Choir. Lector will be Linda Halbur. Gift Bearers will be Macala and Ryan Eischeid. Eucharistic Minister will be Julie Eischeid. Casket Bearers will be Keith Halbur, John Halbur, D.J. Halbur, Al Eischeid, Jon Leonard, and Mark Wittrock. Honorary Casket Bearers will be Lisa Fangman, Diane Rupiper, Sharon Bierl, and Karen Prebeck. Burial will be in the parish cemetery. Friends may call at St. Augustine Church in Halbur after 5 p.m. on Tuesday where there will be a Christian Wake Service held at 7 p.m. Visitation will resume at St. Augustine Church in Halbur starting at 9:30 a.m. on Wednesday, and continue until the time of the funeral mass. Funeral arrangements are under the direction of the Sharp Funeral Home in Carroll, and online condolences may be left for Lori’s family at www.sharpfuneral.com. Born on August 13, 1965 in Carroll, Iowa, Lori was the daughter of Jim and Betty (Ragaller) Halbur. She grew up near Halbur, and attended the Kuemper Catholic School System, graduating in 1983. After high school Lori was a dedicated homemaker, and later worked as a bookkeeper before starting her own housing company. Lori enjoyed gardening, cooking, golfing, being on the water, and in the sun, and socializing. Most of all Lori enjoyed the time she spent with her entire family, and making others happy. Left to celebrate Lori’s life are her children: Jamie Breckenridge and her husband Thomas of Ankeny, Wade Handlos and his wife Heidi of Des Moines, and Jacob Handlos and his wife Kayli of Des Moines; her grandchildren: Joclyn, Trae, and James Breckenridge, and Wesley Handlos; her parents: Jim and Betty Halbur of Halbur; siblings: Lisa (Al) Eischeid of Halbur, Keith (Linda) Halbur of Omaha, John (Brigid) Halbur of Manning, Julie (Jon) Leonard of Carroll, DeAnn (Mark) Wittrock of Halbur, and D.J. (Amy) Halbur of Halbur; Lori’s partner: Dale Noftsger of Des Moines, as well as many nieces, nephews, and other extended family and friends. Lori was preceded in death by her maternal grandparents: John and Anna Ragaller, and her paternal grandparents: Albert and Agnes Halbur.

Lori Handlos, age 51, of Carroll died unexpectedly on Saturday, May 6, 2017. Mass of the Christian Burial will be celebrated at 10:30 a.m. on Wednesday, May 10, 2017 at St. Augustine Catholic Church in Halbur. The Celebrant will be Fr. Steve... View Obituary & Service Information

The family of Lori Handlos created this Life Tributes page to make it easy to share your memories.

Send flowers to the Handlos family.