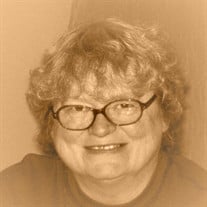 Linda L. Pierce died on Sunday, December 06, 2020 at 8:30 p.m. at the Twin Oaks Assisted Living at the young age of 71. Mass of the Christian Burial will be celebrated on Saturday, 10:00 a.m., December 12, 2020 at St. Bernard’s Catholic Church in Breda, Iowa. The Celebrant will be Reverend Timothy Friedrichsen. Instrumental music will be by Marilyn Hundling. Lectors will be Megan Hawkins and Dan Pierce. Casket Bearers will be Dan Pierce, Peter Cerny, Wayne Schulte, Eldon Schulte, Jim Schulte, and Steve Schulte. Burial will be in St. Bernard’s Cemetery in Breda. A public viewing without greeting the family will be from 9-9:30 a.m. on Saturday at the church. A livestream of the funeral mass will be available at the time of the service on the Christ The King Catholic Community-St. Bernard’s Catholic Church Facebook Page at https://www.facebook.com/ChristTheKingCathollicCommunityBredaIowa/ Those attending the funeral mass are required to wear a face covering and abide by current social distancing guidelines. Funeral arrangements are under the direction of the Sharp Funeral Home in Breda and online condolences may be left for Linda’s family at www.sharpfuneral.com. Those wishing to mail a memorial may direct it to the Sharp Funeral Home (Sharp Funeral Home, 226 W 8th St, Carroll, IA 51401) or directly to her daughter Tammy L. Pierce-Cerny (20129 Easton Rd, Easton, KS 66020) Linda was born on October 17, 1949, at St. Anthony hospital in Carroll, Iowa, the daughter of Edgar and Elva (Ludwig) Schulte. She spent many years practicing cosmetology and making other women beautiful. She later worked at Wells Manufacturing until she retired in 2013. She moved from Iowa to Kansas in 2013 to live with her daughter until 2020. She moved to Twin Oaks Assisted Living in Kansas for additional care while remaining close to her daughter's family. Linda’s greatest joy was spending time with her grandchildren. She was so proud of every single gift they sent her. Linda kept herself busy during her retirement. She enjoyed doing word searches and reading novels. It was almost impossible to find her without one or both books. She was a voracious reader, and there were never enough books for her. She loved to knit and crochet and would spend hours making baby blankets, adult blankets, etc. She was especially fond of holidays -- any holiday she could decorate for. Even when it wasn’t a holiday season, she would decorate for spring, summer, fall, or winter. Christmas was her absolute favorite holiday, and after she would decorate, there was not a single room that was without some sort of decorations. There could never be enough decorations for her. She enjoyed playing games of any sort and would play both board games and card games with her grandchildren. Even if they didn’t completely understand the rules, they would come up with a set of rules. She would spend hours playing card games and matching games on her computer. Linda was a very religious person. She enjoyed taking her grandchildren to Mass on Sundays and praying the Rosary. Linda was very feisty, and her greatest enjoyment came from arguing with others to get them riled up. No one was safe from her wanting to argue – family, friends, staff, and residents at the assisted living facility. She is survived by her children, James William Pierce (married to Mariela Savova), (LaVerne) Daniel Pierce (married to Misty Pierce), and Tammy L. Pierce-Cerny (married to Peter Cerny); grandchildren, Andreas Pierce, Klarissa Pierce (married to Landon Lozano), Alexxis Pierce, Riley Pierce, Lyndiana Pierce, and Jethro Cerny; siblings, Gerald (Peg) Schulte, Bob (Jan) Schulte, Mary (Orv) Eich, Wayne Schulte, Eldon Schulte, Jim (Sue) Schulte, Steve (Peg) Schulte, LouAnn (Dennis) Vulgamott, and Sharon (Dan) Snyder. She is also preceded in death by her parents Edgar and Elva Schulte, Shirley Ann Schulte (sister), and John Schulte (brother).

The family of Linda Pierce created this Life Tributes page to make it easy to share your memories.

Send flowers to the Pierce family.