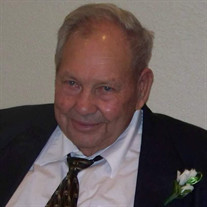 Leroy Edgar Koster, 85 of Breda, died Friday, March 1, 2019 at St. Anthony Regional Hospital in Carroll. Mass of the Christian Burial will be celebrated at 2 p.m., Tuesday, March 5, 2019 at St. Bernard’s Catholic Church in Breda. The Celebrant will be Fr. Mark Stoll. Music will be by Marilyn Hundling and the St. Bernard’s Choir. Lectors for the funeral mass will be: Bob Wiederien, Annette Koster and Andy Koster. Gift Bearers will be: Lori Koster, Karen Koster, and Shery Koster. Eucharistic Ministers will be: Chris Koster, Nicky Wiederien, and Jean Grote. Casket Bearers will be: Derik Koster, Brian Koster, Matt Koster, Josh Wiederien, Mike Lewis, and Zach Koster. Burial will be in St. Bernard’s Cemetery in Breda with military honors conducted by the Breda American Legion. Friends may call at St. Bernard’s Church in Breda after 4 p.m. on Monday where there will be a rosary at 5 p.m. by the Carroll Knights of Columbus and a Christian Wake Service at 7 p.m. Visitation will resume at St. Bernard’s Church in Breda on Tuesday from 1-1:45 p.m. Funeral arrangements are under the direction of the Sharp Funeral Home in Breda and online condolences may be left for Leroy’s family at www.sharpfuneral.com. Leroy Edgar Koster was born on July 25, 1933 at Carroll, Iowa the son of William and Matilda (Grabner) Koster. He grew up on the family farm near Breda and attended St. Bernard’s School. Leroy served in the United States Army from 1954-1959 as an Army Medical Corpsman. On April 8, 1961 he was united in marriage to Joanell Blum at St. Joseph’s Catholic Church in Wall Lake, Iowa. The couple made their home southwest of Breda where they were blessed with four sons and two daughters. Leroy’s favorite pastimes were cheering on his children and grandchildren at their sporting events, fishing, hunting, watching westerns and rooting for the St. Louis Cardinals. He was a member of the Carroll Knights of Columbus, Breda American Legion, and St. Bernard’s Parish. Left to celebrate his life is his wife of 57 years, Joanell Koster of Breda; his children: Kevin Koster, SGT- Ret. and his wife Annette of Breda, Eileen Lewis and her husband Mark of Cambridge, Chris Koster and his wife Karen of Breda, Tim Koster, SFC – Ret. and his wife Shery of Silverhill, AL, and Nicky Wiederien and her husband Bob, LCDR-Ret. of Ocean Springs, MS; his daughter-in-law, Lori Koster of Breda; 19 grandchildren; 13 great-grandchildren; 1 great-great grandchild; his sisters: Maxine (Marv) Heinrichs of Conroy, MN, Ruth (Clete) Heinrichs of Marshalltown; his brother, Roger Koster of Elkader; his sisters-in-law, Delores Koster of Carroll, Lois Cave of Colorado Springs, CO, and Mary Schroeder of Wall Lake; as well as many nieces, nephews and other extended relatives. Leroy was preceded in death by his parents; his son, Scott Koster; his son-in-law, Ken Young; his siblings: William and Loretta Koster, Velma and Robert Blum, Doyle and Bernice Koster, Walt and Viola Koster, Kermit and Elsie Koster, and Don Koster; and his sister-in-law, Darlene Koster.

The family of Leroy Koster created this Life Tributes page to make it easy to share your memories.