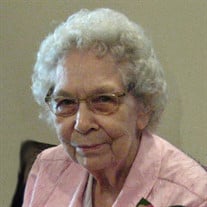 Leone Monica Buelt of Breda, age 97, passed away peacefully July 6, 2021, at Accura Healthcare of Carroll. Mass of the Christian Burial will be celebrated at 10:30 a.m., Tuesday, July 13, 2021, at St. Bernard’s Catholic Church in Breda. The Celebrant will be Fr. Timothy Friedrichsen. Music will be by Marilyn Hundling and the St. Bernard’s Choir. Lectors will be Nick Buelt and Jake Buelt. Gift Bearers will be Kay Davis and Rosie Wiederin. Eucharistic Minister will be Jake Buelt. Casket Bearers will be Leone’s grandchildren. The Breda American Legion Auxiliary will form an honor guard for the Funeral Mass. Burial will follow the service in St. Bernard’s Cemetery in Breda. Visitation will be held on Monday, July 12, 2021, at the Sharp Funeral Home in Breda from 5-7 p.m. A prayer service will be held at 6 p.m. Memorials may be left at the funeral home or the church for a later designation. Funeral arrangements are under the guidance of the Sharp Funeral Home in Carroll, and online condolences may be left for Leone’s family at www.sharpfuneral.com. Leone Monica Wittry was born November 12, 1923, near Coon Rapids, Iowa, to Jacob J. and Anna C. (Nieland) Wittry. She attended country school until the family moved to Breda. She then enrolled in St. Angela’s Academy and graduated three years later. On November 22, 1944, she was united in marriage to Leo F. Buelt at St. Bernard Catholic Church in Breda while Leo was on furlough from the US Army before going overseas. The couple was blessed with five children: Kay, Mary Jo, Rosie, Lee, and Bob. While her family was growing, Leone kept house, tended garden, preserved food for the family and spent many hours sewing clothes for her family. As the children grew up, she took a job as a poultry inspector and did other jobs in the Carroll area. She continued gardening well into her 80’s and used her sewing skills as a volunteer with RSVP, making quilts with the group. She also volunteered at the New Hope Village Store, winning the Governor’s Volunteerism Award with the group there. She was a member of St. Bernard Parish and the Christian Mother’s Sodality and the Breda American Legion Auxiliary. Leone is survived by her children, Kay Davis, Kent, Washington, Rosie and Andy Wiederin, Oro Valley, Arizona, and Bob and Joanie Buelt of Breda, Iowa; her sisters, Sister Pauline Wittry, FSPA, La Crosse, Wisconsin and Joan Hannasch, Rosemont, Minnesota; eleven grandchildren; thirteen great grandchildren, two great-great grandchildren, and many other family members and friends. Leone was preceded in death by her parents, Jacob and Anna (Nieland) Wittry, infant brother Jospeh Witty and infant sisters, Dorothy, Helen and Teresa Wittry, her husband, Leo Buelt in 1984, her brothers-in-law, Clarence Kraus and Jerome Hannasch, her daughter and son-in-law, Mary Jo and Bob Haller, her son Lee Buelt, son-in-law, Don Davis, and granddaughter, Jennifer Haller.

The family of Leone Buelt created this Life Tributes page to make it easy to share your memories.

Send flowers to the Buelt family.