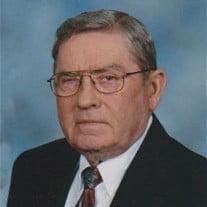 Leon T. Pudenz, 85 of Carroll, died Saturday, May 13, 2017 at Arbor Springs in West Des Moines, Iowa. Mass of the Christian Burial will be celebrated at 10:30 a.m. Thursday, May 18, 2017 at Holy Spirit Catholic Church in Carroll. The Celebrant will be Fr. Timothy Johnson. Music will be by Barb McDermott and the Holy Spirit Choir. Lector for the funeral mass will be: Keith Daniel. Gift Bearers will be Leon’s grandchildren. Eucharistic Ministers will be: Deb Daniel, Donna Pudenz, and Vickie Boes. Casket Bearers will be: Keith Daniel, Adam Daniel, Greg Daniel, Nathan Daniel, Dan Pudenz, Ryan Schoneboom, Joshua Heuton, Thomas Peterson and William Pudenz. Burial will be in Mt. Olivet Cemetery in Carroll with military honors conducted by the Carroll American Legion. Friends may call at the Sharp Funeral Home in Carroll after 4 p.m. on Wednesday where there will be a rosary at 5 p.m. and a Christian Wake Service at 6:30 p.m. The casket will be moved to Holy Spirit Church on Thursday morning where visitation will resume at 9:30 a.m. and will continue until time of the funeral mass. Funeral arrangements are under the direction of the Sharp Funeral Home in Carroll and online condolences may be left for Leon’s family at www.sharpfuneral.com. Born on June 24, 1931 at Carroll, Iowa, Leon was the son of William and Teresa (Wiederin) Pudenz. Leon graduated from Carroll High School. Following his graduation, Leon worked for a cattle feeder near Auburn until being inducted into the United States Army in January of 1953. He received the Korean Service Medal, United Nations Service Medal and the National Defense Service Medal. In 1954, following his honorable discharge he returned to the Carroll area. On November 23, 1954, Leon was united in marriage to Norma Jean Bartlett at St. Lawrence Catholic Church in Carroll. The couple made their home at the William Pudenz family farm north of Carroll. Leon had a passion for agriculture and was engaged in grain and livestock farming and attending cattle sales. He also loved spending time with his entire family, country music, polka dancing and playing cards. In 1991, they moved to their acreage near Carroll and enjoyed spending the winters in Mesa, Arizona. He was a member of the Carroll American Legion and Holy Spirit Church in Carroll. Leon is survived by: his children: Darrell (Sandy) Pudenz of Carroll, Debra (Michael) Daniel of Lohrville, Donna Pudenz of Carroll, Joyce (Mark) Peterson of Overland Park, KS, Janine (Carl) VanGorp of Elkhart, and Tom (Diane) Pudenz of Carroll; 14 grandchildren; 10 great-grandchildren; his sisters: Antonette Staiert of Sac City and Sally Carroll of Florida; as well as other extended relatives and many friends. Leon was preceded in death by his parents; his wife Norma Jean Pudenz in November of 2009; his great-granddaughter, Addison June Pudenz; his sister, Genevieve Staiert; and his brothers: Art Pudenz and Norman Pudenz.

Leon T. Pudenz, 85 of Carroll, died Saturday, May 13, 2017 at Arbor Springs in West Des Moines, Iowa. Mass of the Christian Burial will be celebrated at 10:30 a.m. Thursday, May 18, 2017 at Holy Spirit Catholic Church in Carroll. The Celebrant... View Obituary & Service Information

The family of Leon Pudenz created this Life Tributes page to make it easy to share your memories.