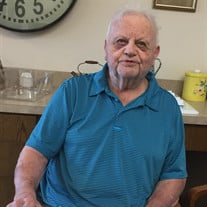 Leon Pletchette, age 80, of Carroll, died Wednesday, May 17, 2017 at the Perry Lutheran Home in Perry, Iowa. Mass of the Christian Burial will be celebrated at 2 p.m. Monday, May 22, 2017 at St. Mary’s Catholic Church in Willey. The Celebrant will be Fr. Timothy Johnson. Music will be by Barb Danner and the St. Mary’s Choir. Mass Servers will be Jacob and Michael Schreck. Lector will be Alyson Schreck. Eucharistic Ministers will be Mark and Mary Schreck. Casket Bearers will be Mark Schreck, Keith Schreck, John Pletchette, John Rossitor, Wayne Heithoff, and Larry Greving. Burial will be in the parish cemetery. Visitation will begin at 1 p.m. on Monday at the St. Mary’s Parish Hall in Willey, and continue until the time of the funeral mass. Funeral arrangements are under the direction of the Sharp Funeral Home in Carroll, and online condolences may be left for Leon’s family at www.sharpfuneal.com. Leon Pletchette was born on December 6, 1936 at Willey, Iowa, the son of Bernard Sr., and Anna (Neppel) Pletchette. He spent his younger years in the Willey community and attended St. Mary’s School, also in Willey. After his formal education Leon began his working life as a carpenter in the Willey area. He then was hired as a mail carrier for the United States Postal Service, a position he held for over 25 years until his retirement. After his retirement Leon delivered cars for Lou Walsh Automotive. Leon enjoyed road trips, and his journeys to Las Vegas. He enjoyed watching and cheering on his beloved Chicago Cubs. Most of all Leon enjoyed sitting on the porch, and visiting with the neighbors. Leon is survived by his siblings: Edward Pletchette of Carroll, and Anita Dorski of Des Moines; as well as his nieces, and other extended relatives. Leon was preceded in death by his parents; his brothers: Eugene, Ronald, and Bernard Jr., Pletchette; and his sister, Freda Pletchette.

The family of Leon Pletchette created this Life Tributes page to make it easy to share your memories.