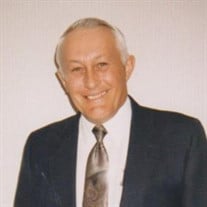 Pete Berning , 84 of Arcadia , died peacefully at his home July 26, 2020. Mass of the Christian Burial will be held at 10 a.m. Saturday August 1, 2020 at St. John’s Catholic Church in Arcadia. The Celebrant will be Fr. Timothy Friedrichsen. Music will be by Sharon Bierl. Lector will be Jeff Berning. Casket Bearers will be Pete’s grandchildren: Ryan Heinrichs, Cassie Heinrichs, Jake Heinrichs, Julie Lopez, Chad Forkenbrock, Matthew Forkenbrock, Tiffany Stenger, and Justin Berning. Burial will follow at St. John’s Cemetery in Arcadia. A luncheon and celebration of Pete’s life will be held immediately following the committal service at the Arcadia American Legion Hall. Those in attendance at the church will be required to wear a face covering, and practice Covid-19 Recommendations. Visitation will be held from 4-7 p.m. on Friday at the Sharp Funeral Home in Carroll. Those in attendance will be ask to abide by all Covid-19 Social Distancing Guidelines, and face coverings are recommended. There will be no public visitation at the church prior to the funeral mass. Funeral arrangements are under the guidance of the Sharp Funeral Home in Carroll, and online condolences may be left for Pete’s family at www.sharpfuneral.com. Born March 29 th 1936 in Carroll Iowa, Pete was the son of Leo M. and Frances (Jasper) Berning of rural Breda. He spent his youth in the Breda area attending St Bernard School. At age 14, he began his working career becoming a hired hand for Mary Nieland earning $130.00 a month. Unbeknownst to his parents, he purchased his first rifle and bought his first car, a 1941 2 door Ford for $400.00 before he was 16. At age 17, Pete went to work for Brinkman Feed in Carroll and in 1959 started working with Farmer’s Co-op of Arcadia, retiring after 42 years. He shoveled coal, unloaded railcars, made and delivered feed and ended his co-op years as a salesman. He took pride in his work and the elevator crew became some of his dearest friends. Pete married Mary Jo Badding at St. John Catholic Church in Arcadia with Father Ahmann officiating. They purchased their home in Arcadia where they raised five children; Beth, John, Jim, Sara and Jeffrey. Pete was a loving husband, a first rate Dad and a good neighbor and friend. He enjoyed life. His willingness to sit next to anyone on a plane, at a ballgame, at the casino or in a restaurant ment he never met a stranger. Before long, he would know where they were from, where they were going and what they did in life. Pete belonged to St John Catholic Church, The Catholic Order of Foresters, served on the Arcadia telephone board of directors and retired after 20 years of service on the Arcadia Fire Department. Pete enjoyed fishing, including ice fishing, he bowled for years in a mixed doubles league, and attended dances at the Legion and Starline, (the dancing part not so much). He enjoyed time at the casinos and loved to play cards, especially euchre and rummy. As soon as his grandkids could count he was teaching them how to play rummy. Pete loved to travel; often taking his kids fishing to the lakes of Iowa and Minnesota and many a farm pond. There were trips with the Co-op crew, trips with family to the Black Hills, family anniversary trips to Colorado, and vacation spots in Missouri. He cherished the outings with Mary Jo, traveling to Alaska, Hawaii, Texas, Florida, Washington DC, Las Vegas and New Orleans. He especially enjoyed the excursions to Arizona, (sometimes two or three times a year) to see his kids and grandkids with Pete doing all the driving, of course. He was an avid Cubs fan and enjoyed attending spring training games in Mesa. Because of Pete’s volunteer service with the Mesa Jaycees he was made an honorary life member. Pete is survived by his wife Mary Jo, children and grandchildren: Beth (Forkenbrock) and Jesse Castellano, San Tan, AZ, her children Julie and Mario Lopez, children Eric and Sophia; Chad and Gennie Forkenbrock, children Payton and Connor; Matt and Dawn Forkenbrock, children Silas and Audrina all from AZ ; Jim and Lisa Berning of Carroll, their children Tiffany and Andrew Stenger of Norwalk and Justin and Monica Berning, child Lincoln of Cedar Falls; Sara and Kris Heinrichs their children Ryan, Cassie and Jake of Sleepy Eye, MN and Jeffrey and Jenna Berning and their children Nash and Lennon of Scottsdale, AZ and his in-laws Merlin Wuebker of Milford, Rosie (Lon) Diers, Joan Badding, Mardy Badding, Surge Badding all of Carroll, Jan Badding, Elkhart, IN and Elmer Bedford of Fort Dodge, many nieces and nephews cousins and friends. Pete was preceded in death by his parents; son John in 1984; son-in-law Scott Forkenbrock in 2007; grandson Eric Forkenbrock in 1989, great grandson Luke Forkenbrock in 2014, parents-in-law Bill and Rose Badding; sisters Rita Wuebker, Lorraine (Ed) Gehling, Lois (Alfred) Hoffman and brother Clarence (Sally) Berning; brothers -in-law Bob Badding , Don Badding, Bill Badding, Joe Badding and sister-in-law Kathy Bedford.

Pete Berning , 84 of Arcadia , died peacefully at his home July 26, 2020. Mass of the Christian Burial will be held at 10 a.m. Saturday August 1, 2020 at St. John&#8217;s Catholic Church in Arcadia. The Celebrant will be Fr. Timothy Friedrichsen.... View Obituary & Service Information

The family of Leo "Pete" Berning created this Life Tributes page to make it easy to share your memories.

Pete Berning , 84 of Arcadia , died peacefully at his home July...